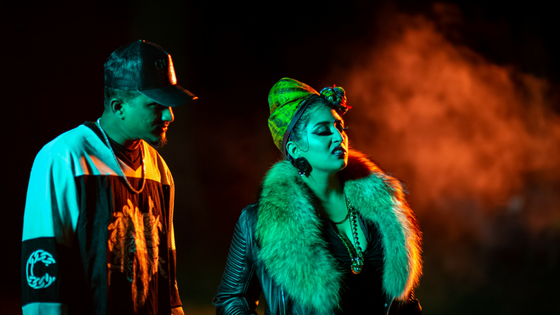 The new track by Divine featuring Raja Kumari is fire!

The thing about rap tracks is, if it hits you, it hits you hard. And when you have DIVINE, the biggest name in Indian hip-hop in a partnership with his City Slums collaborator (and a powerhouse talent herself), Raja Kumari, you know you’re in for a treat.

Produced by Los Angeles-based producer K-Major (who has worked with hip-hop giants like Usher, French Montana, and Future), Roots is filled with quotable lines peppered throughout the track.

Presented by Sony Music India, the video for the track has also been produced by the music label and directed by Shiraz Higgins.

There’s a shoutout by RK to the ‘gundas in the 59’, references to substances, pointed barbs at those posing as pretenders to their thrones.

Then the powerful chorus drops: ‘Main tere jaisa nahi/tu mere jaisa bohat hai/ main tere jaisa nahi, kyunki tera koi boss hai’ (I’m not like you, but there are several of you like me and that’s because I’m my own boss).

DIVINE picks up after this as he goes rather specific with his memories of growing up and the sort of references you’ll only get if you’ve ever lived and breathed in the streets of Mumbai and its gullies. The puns come thick and fast as he ties back to his (no surprise here…) Roots.

One line that’s absolute fire is ‘sabhi jaanwar/yeh gang nahi Jumanji hai’. DIVINE mentions how everybody is waking up to sneaker culture and such now, but that he’s ahead of the game and UK rapper Stormzy knows him.

No humble-bragging here, Vivian is proud of what he has achieved and says as much. To underscore that point he gets anecdotal with his childhood and this is the most effective part of the track.

Getting back to the video, we’re not as much in love with it as we are with the track itself and that’s because there’s no real appeal apart from seeing the sharply dressed DIVINE and RK go about their business. Couple that with a dimly lit set and you’re wondering what vibe they were going for, here.

Nevertheless, last we checked, it was trending on YouTube in India at #15.