Why wasn’t Kanika Kapoor in the Pretty Girl video? 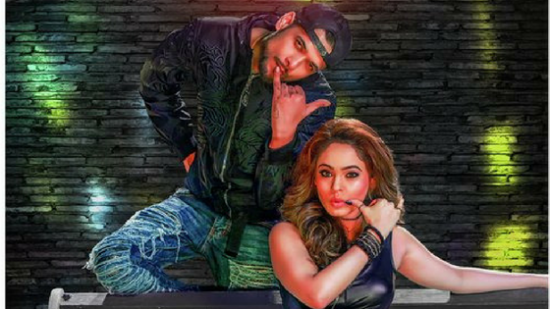 Here’s to the traffic jammer, absolute eye-candy group, that charms everyone with their vibrant outfits (all thanks to costume designer Minisha Mendoza). However, the moment we see sparkly gems instead of a normal lipstick, we worry if this is a replica of Monali Thakur’s previous fashion disaster, Tamanna.

It does not disappoint, in the sense that we expected this to be just as bad. Because wearing bindis with western outfits is such a trend, right? And dancing badly with a banner of MJ’s Swag behind, how cool? No.

Pretty Girl, sung by Kanika Kapoor and Ikka, featuring Malobika is what we like to call a colourful disaster. Each person cannot, for the holy love of god, twerk. Kanika’s vocals are okayish, but the lyrics (by Shabbir Ahmed) ruin the song for us. It’s just the voice that we like. Nothing else.
Mind you, the song has been composed by Kanika herself, which sounds strikingly similar to Chittiyaan Kalaiyaan, from Roy, sung by Kanika and Meet Bros. We can definitely make out the inspiration here.

Now, we expect better from Ikka, who has previously been a part of Badri Ki Dulhania and Paani Wala Dance. But, don’t keep your expectations too high, because, you’ll be thoroughly disappointed. His rap sounds like a death trap, with such weak vocals, you can sense his tiredness and boredom while he was recording the song.

The horror continues when you see the hoodie girl (with THAT lipstick). Kanika Kapoor is a pretty girl, but this song has nothing of her own.