What you need to know about The Yellow Diary’s second EP, Izafa 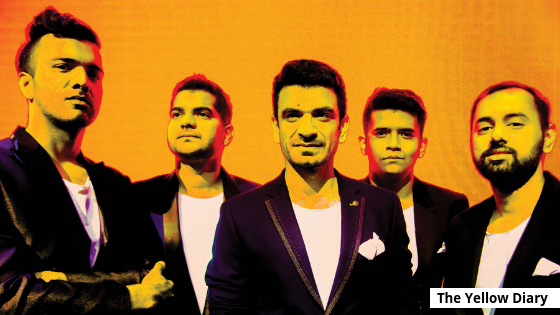 With each of their tracks – six over two EPs, The Yellow Diary, an Indian alt-rock band signed to Sony Music has showed off a smooth progression in sound and scale.

It’s only been eight months since the release of their debut EP, ‘Marz’ and the sophomore effort, the three-track ‘Izafa’ has just dropped.

What you will note is a common thread that runs through the second EP — Rajan Batra’s expressive easy-on-ears vocals and his deep, profound lyrics that speak to you like a close friend returning after a long vacation, Stuart Da Costa and Vaibhav Pani’s restrained riffs that keep you rooted as Himonshu Parikh’s key-work takes centrestage backed by the groovy beats provided by Sahil Shah.

The title track of ‘Marz’ was the only one to have a music video. However, this time around, all three tracks of ‘Izafa’ will have accompanying music videos, all directed by Vishal Handa (of ‘Aaya Na Tu – Reprise’ fame), each releasing within days of each other.

‘Izafa’ (‘advancement’ in Urdu), “is exactly what this EP represents for the band in terms of taking the next step in our musical journey,” says the band.

Speaking of ‘next steps’, their mellifluous rendition of the legendary Ustad Nusrat Fateh Ali Khan saab’s ‘Tera Jeya Hor Disda’ breaks free of any preconceptions/misgivings you might have toward the re-creation of the classic. This one might even become a modern classic, we dare say! It will be the first video to drop, the same day as the EP.

Dheere Se encapsulates the afterglow of an intimate moment and washes over you in mind-altering waves.

Buniyaad elaborates on the fact that moments and things do not last forever and that it’s important to be rooted to reality but just as important to dream and aspire.

The soundscape, this time is more large-room, anthemic and has a sing-along quality that will have you crooning to the lyrics as soon you hear them.

Profound as always, the words speak out to you. What we’d like to tell you this. If you haven’t heard them yet, you’re missing out.