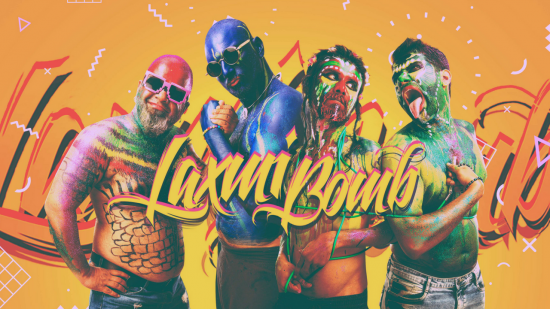 Mumbai-based electro-pop band Laxmi Bomb has shocked and awed in equal measures over the past few years, but they take it up a few notches with their latest offering, the 11-track Bol Na Ranti. The music video for their newest music video (dropped at midnight) for Asshole, is self-explanatory and wildly colourful.

Shot at the Goa Institute of Management Building at Ribandar in Goa, it’s been directed by Anmol Mahajan, who in frontman Keegan Pereira‘s words, is “a very interesting fellow”.

But more on that later. The track is not so much about a person as it is about the ‘keeda’ in each of us. Here’s what you need to know about the track and the video.

Like it is with life being a box of chocolates, with ASSHOLE, “you just never know, if you going to get a thinking man…or a stinking one,” says Keegan.

2. It all started with science

Of the creation of the music video, he says, “Janek Świerkowski, a scientist in the field of popular science from Poland/Portugal was in Goa for a performance called ‘The Evolution of Stars’. Their performance was to showcase the journey of a star from birth to its death. Within that narrative, a ‘live loud performance’ by a band was the need of the hour. Janek asked us if we could fly down to Goa and be put in room, the size of a small classroom, be painted like we were in the photo shoot and perform one song, four times a day, for days days in a row. We asked if we could video shoot it. And that’s where it all started.”

3. We’re all a**holes
“The video brings out the a**hole in each one, literally. The use of colours and psychedelic patterns is a reflection of the things we have consumed, or devoured. It emanates from various orifices, in various shapes and sizes and will have its own expression in its own sweet time. That’s the ASSHOLE, present in each and everyone of us!”, explains Keegan.