‘The song is about small-town guys’ 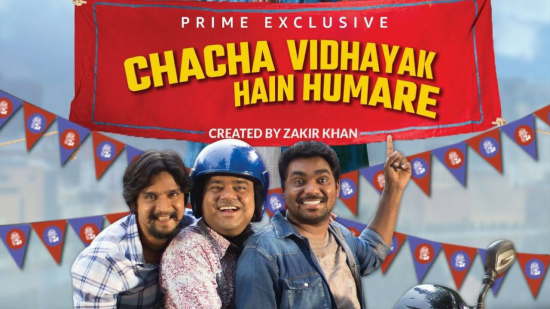 Amazon Prime Video India has launched the first season of a new comedic series called Chacha Vidhayak Hain Humare. Starring and created by comedian Zakir Khan (aka Sakht Launda) in the lead role, it follows the antics and escapades of jugaadu wastrel named Ronny who goes around Indore telling people that his uncle is a legislator and aims to do good for people with his neta-giri.

The quirky title song that runs at the end of each of the eight episodes has been composed and sung by Vishal Dadlani with lyrics by Hussain Haidry. Capturing the flavour of a day in the life of someone from a small town/city and the friends you make in a place where everybody knows everybody (I come from one, so I know), Hussain’s lyrics speak to you.

We reached out to the lyricist for a short Q&A about the show. Here goes…

What came first for Chacha Vidhayak…? The lyrics or the music?
I wrote the lyrics first, since at that time we didn’t know who would end up composing it. Thankfully, Vishal Dadlani came on board and made it look way more awesome than it was on paper!

When did you come on board?
I came on board when Zakir Khan and Vishwas Sharma (the writers of the series) called me up to write it. The shooting was still going on at that time.

What was the brief given to you?
It was mainly related to the story of the series and how this song had to be about small-town guys like us who have spent some time of their lives idling in their youth with their close friends.

What feedback did you get about the track?
I got some really nice feedback from everyone in the team. They liked it. Once it got composed so well, it seemed even better.

Your favourite line from the track?
I think I like the use of the word Fanney Khaa’ in the first line itself. That helped me write the further lines more easily and get a certain tone.

Will the show have a second season?
I don’t know if there is a Season 2, but I do hope there is!

Any other projects in the pipeline?
I have a couple of more songs in the pipeline, films-wise, but not sure of when and how they will release. So I’m just waiting and hoping for the best!