The one ‘Adaa’ of a woman Sudhanshu is fidaa over? 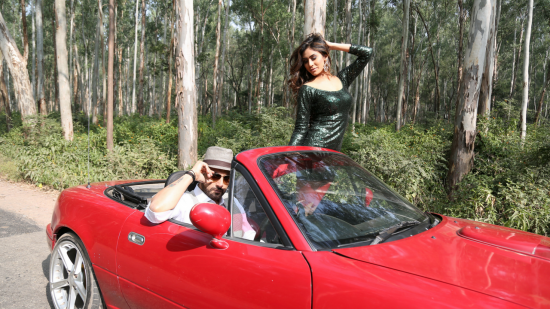 The answer isn’t one you’d expect, but it’s a good one, nevertheless. Sudhanshu Pandey has worn many hats as a singer, actor and model. He returns to a very specific one with Teri Adaa, his latest single. It’s his first as a solo artist.

Remember him from his time in India’s first boyband, A Band of Boys? He had just come to Mumbai from Nainital then, and made his way up in the business doing ads before that.

He has worked alongside 成龍 Jackie Chan in The Myth. Other #Bollywoodfilms like Singh Is Kinng, Singham or Murder2, too. Or you could recall him more recently, from Anil Kapoor’s ‘24’ Season 2. Or you could watch him in the upcoming Rajinikanth-starrer 2.0.

But let’s get back to Teri Adaa, where he’s playing a suave mafia don. The video has been directed by Mehul Gadani MG. Sudhanshu has co-written the lyrics with Ravi Singhal, who is also the song’s composer. The song has released through Zee Music Company.

We had questions about the video. A lot of them. He was sporting enough to answer all of them, however difficult they were.

How did Teri Adaa come to be?
While writing the song — we knew it was going to be a romantic song — we wanted to use words that appreciate or glamourise the adaa (style) of a woman. The song is appreciative of that.

Where was the song shot?
The song has been shot in Mohali, on the highway from Mohali to Kasauli. That’s why you get to see those beautiful fields in the drone shots.

We read comments that the theme of the video is similar to that of Zayn‘s Let Me. Your take on it?
Well, the theme has never been inspired, forget having taken it from anywhere. It is absolutely original and I haven’t in my life till date seen any of Zayn’s videos or songs. You are talking about Zayn Malik, right? I don’t know what his songs are like, so there is no question of having taken inspiration from there.

In real life, do you believe in love? Or is making money more important?
In real life, I only believe in love because that is the only bond that can keep humans together and I completely believe in love. For me, love is the basis of everything and the only thing I don’t have a love for, is money. Money, I think, is a requirement. It is a necessity because I think that is what money is. But love I think cannot be downgraded to money. So, love is something that is connected with the soul and that is the basis of our existence.

Does the don you play in this story have a name?
No, because we obviously didn’t want to give him a name. I am sure some people could relate to his characters while others could not. To answer your question, we thought it best if we just kept it free of a name.

At the heart of the video is a gold fidget spinner. Why?
The gold fidget spinner just added to the ambience of the whole mafia set up. Also, gold made more sense than any other colour. A fidget spinner, because I believe that its something that every young person can relate to, everyone has used one and I thought everybody could connect to. That’s why it’s there in the video.

How often in a day do you get fidgety?
I am a very very calm person and relaxed. I don’t really get fidgety at all. Unless I get an allergy and I definitely need to scratch and probably I’ll get fidgety (chuckles). Otherwise, I don’t get fidgety.

One song that spins in your head all the time?
Yes, I do have this one song which is sung by Mohammed Rafi, “Tum Jo Mil Gaye Ho”, which runs in my mind almost every day.

What’s next after Teri Adaa?
I am already ready with my next song. It is a Punjabi song and it is going to be in the popular genre and that is something that I am really looking forward to because that is going to create a big, big, big noise.

Do you plan on making an album?
No, I don’t want to create an album because albums don’t make sense today because of the digital platforms. I think it is better and it makes more sense business-wise, it’s more feasible to keep coming out with singles every two or three months, whichever is more comfortable. So, I am going to be coming out with singles very often.

Acting or singing? What are you most comfortable with?
Well, I can’t choose between acting or singing because I think both these skills that I am bestowed with by God’s grace, I would like to utilise both of them. I enjoy doing both of them and if I combine them in some way or the other anywhere, I would love to do that at any given point in time.