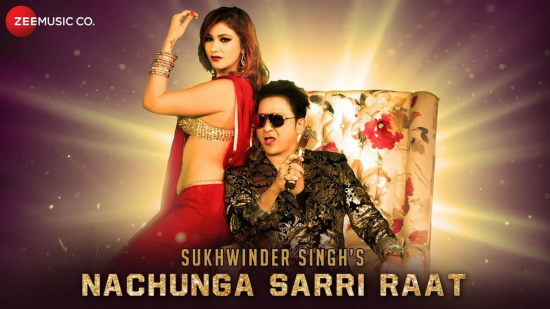 Why is the great Sukhwinder Singh putting out one bad track after another?

We held our collective breaths and thought the worst was behind us. After all, getting it wrong thrice can’t be a thing. But trust Sukhwinder Singh to go for a third run.

After Zannata (from the Marathi film, ‘Raja’) to the non-film single ‘Rangon Ka Atom Bomb, Sukhi has graced us with Nachunga Sarri Raat, a track and video that puts to shame both these venerably bad tracks.

This one is all about going on dancing all night after a night of ‘unlimited alcohol’. If it doesn’t go down his throat, it’s a no-show. Where have we heard this before? Blinged-out dudes, skimpily dressed girls by the poolside, singers posing with bottles or glasses they never have a swig out of, but sing praises of.

When you see a video start with the singer feeling up a golden gun, dressed in a gold-embroidered suit, drinking some gold-coloured liquid, you know they’re masking something bad.

Also, it has every cliche imaginable. We’d call it an eloquent disaster if only it wasn’t more of the latter.

And here’s why. This is Sukhwinder Singh we’re talking about. We expect the world of him. Not tripe like this. Each single we’ve mentioned here is a landmine.

What happened to the guy who sang Chaiyya Chaiyya? Where is the guy who won National Award for Best Male Playback Singer for Haider? He must have decided that he will “Nachunga Sarri Raat” and hence, he is not here anymore (only figuratively, though). Either way, we miss the Sukhi we once knew.