The Darshan Raval Dictionary: A Crash Course by a Darshaner 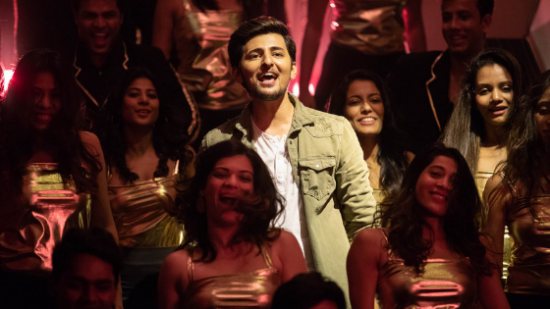 The meaning that lies behind the tracks released by Darshan Raval is uncomplicated. With ease, one could comprehend the gut-wrenching misery, bubbling joy or bonafide love. He gives away the vibe of the song in a blink of an eye, either through the background music or his mellifluent voice. To crack and decode the meaning in Darshan’s songs is a cakewalk for his followers.
But to try and understand the meaning behind certain words and catchphrases related to India’s heart-throb is something you’ll master only if you’re a true-blue Darshaner!
Lucky for you, here’s a crash course in BlueFamilySpeak!

#SpreadLove
Darshan’s motto. His answer to every unwanted controversy that comes his way. It’s also his way of expressing gratitude. In fact, it’s his standard reply to most compliments from Darshaners. It’s the alternative reply to a #ThankYou. Sadly, though, this whole #SpreadLove thing works well within the fandom, only. When we Darshaners attempt to #SpreadLove outside the fandom, we’ve received nothing more than perplexed stares, and confused-sounding ‘What did you say?!’, from our lab-rats outside the fandom!

Soon/Very Soon
Wondering how to get on a Darshaner’s nerves within milliseconds? Add the word ‘Soon’ anywhere in your sentence, and you have accomplished your mission!
Along with making songs that top the charts, Darshan has reinvented and completely changed the meaning of this word. Without a doubt, his #Soon deserves a separate column in the Oxford Dictionary because nowhere does it fit in the literal meaning mentioned in any dictionary, worldwide. And, here’s how I think Darshan’s ‘Soon’ should be defined as:
‘Soon (adverb): in or after two hours, many months and several years’.
Basically, if Darshan Raval says it, then, it is not happening “soon”. Don’t fall into the trap!

‘I’m not late’
As a matter of fact, Darshan Raval shows up on time only once in a blue moon, and on those rare days, the feeling of utter disbelief strikes us before happiness does! But on the days when he’s late – ranging from being ten minutes to an hour late – this is the standard dialogue all of us are used to hearing. ‘I’m not late. In fact, I’m early’, defended Darshan in a live chat, not too long ago. ‘I’m not late. In my clock, it is exactly three o’clock’, he said in another live chat, when the needles were striking 15:20 in our clocks!
But needless to say that no matter how long it takes for him to turn up, we’re ready to hang in there just to catch a glimpse of our happy #BlueMan, and his charismatic smile.

#GABBU
To all the new kids in the block, ‘Gabbu’ is his nickname! I can say this with confidence that every Darshaner in the fandom has tonnes of beautiful memories attached with Gabbu, the nineteen year-old Darshan. Gabbu was the slightly chubbier version of The Darshan Raval, with half-framed round spectacles that gave him the look of a nerd [an adorable one; one you’d want to date!], and added on to the innocence on his face! Gabbu is not a nickname. Gabbu is an emotion. If you are someone who has witnessed the transformation of Gabbu to The Darshan Raval, over the years, you would know! GABBU, WE MISS YOU!

Relationship Status & String-y Girlfriends
Darshan claims to be #HaqSeSingle, but all of us – Darshaners – know the bitter truth is that he is in a serious relationship with… wait for it…his guitars! Not just that, but he is dating more than one guitar at once – talk about talent! But on a serious note, Darshan’s guitars are a part of him, there’s literally nothing on Earth that owns the power to separate then and there’s no one better than us who can understand his love for his guitars. One can easily understand the immense love he has for his guitars on witnessing the gentleness with which he pulls the strings, and the warming smile that smears on his face when he plays the guitar. Be it at events, interviews, music videos or concerts – Darshan’s ‘girlfriends’ have played a cameo role! Truth be told, we are extremely jealous of his guitars, and the sizzling chemistry they share!

That’s about it! Gabbu managed to pull the strings of our hearts while romantically pulling the strings of his guitars, and all of us are eagerly anticipating to watch the romance blossom between Darshan and his guitar in his music video some time ‘soon’. Till then, #SpreadLove!