The best songs are born in the unlikeliest of places and under very different circumstances than originally intended. The same holds true of Namaste England’s Tere Liye, composed by Mannan Shaah. Sung by Atif Aslam, it’s a song we’ve loved at first listen. Turns out, it wasn’t a Hindi song at all.

Here’s what Mannan shared with us about the creation of the song, “This song actually has an interesting back story to it. I had cracked this song on an English poem written by Harsh Mehta, a very close childhood friend of mine. So, initially, I felt that it was a perfect song for English music listeners. It was later on, when I played the song to Vipul ji (Namaste England director Vipul A Shah) one day that he suggested I ‘translate’ it into Hindi, keeping in mind Hindi music sensibilities. I did that and played it to him again and he instantly loved it! We played the song to Javed Akhtar sahab and he further penned the lyrics of the song. It was after the song was ready that we decided to get Atif on board to sing the song.” 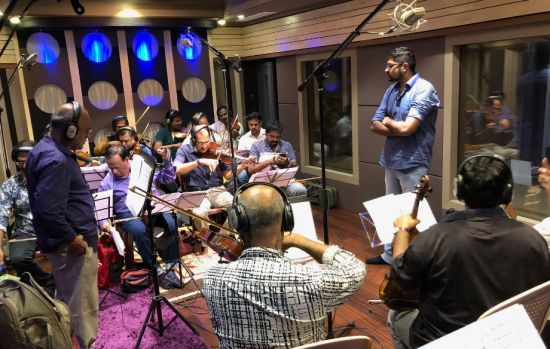 Mannan Shaah during the composing of Namaste England‘s Tere Liye

How did he cast the voices for the song? “Atif was always my first choice for Tere Liye. I’m also very happy to introduce a new and a fresh voice to the music industry in Akanksha Bhandari. I feel she has a magical voice and she has a long way to go”, he tells bandook.

What was the thought behind creating Tere Liye? “To have a quintessential romantic song between two protagonists. When I had created the song, I had actually visualized ‘My Heart Will Go On’ from Titanic as a reference point. I could actually see those visuals coming alive while composing Tere Liye. It was by sheer coincidence that Vipulji too was thinking on the same lines and it came as a shocker when I saw Arjun and Parineeti doing that iconic Titanic pose on a Bullet!”