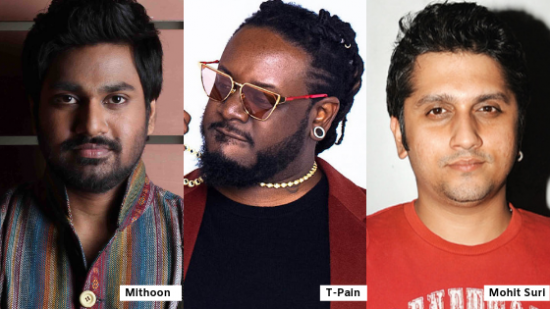 In what might be a first for Bollywood music, T-Pain was openly accused of lifting the signature tune of Aashiqui 2’s ‘Tum Hi Ho’ (sung by Arijit Singh) for his song ‘That’s Yo Money’ after fans had a chance to watch the song’s video and listen to the track.

He tweeted about the ‘surprise’ track ‘That’s Yo Money’ on Dec 14. And the next day, he got a message from the Tum Hi Ho composer himself. Mithoon openly called him out…

Sir, the melody that you have used in your new song is my original work for a previously released Hindi film..The Label is looking into this.#tumhiho #Aashiqui2 https://t.co/5fnDf4sfg7

Later that day, the film’s director, Mohit Suri weighed in…

In response, T-Pain went ahead and wrote this…

Woke up to getting dragged by brown twitter. Sooooo yea. I definitely didn’t produce this song. Had no idea that was a sample and have never heard the music before I got the beat from the producer. Easy thing to work out. The labels will be in contact. Thanx

And while being called ‘Brown Twitter’ didn’t go down well with most Indians, one in particular asked others to cut the rapper some slack because his name’s Faheem, bruh! (so what, bruh?)

I don’t get why people are hating on tpain and he def aint racist. His name is Faheem bruh! They don’t know.

Plus, hes collaborated with our culture and we should never forget that https://t.co/OLgzCjdoSX

Yeah, so he’s “collaborated with our culture”, so what? What exactly do you mean by “we should never forget that”, bruh? Anyhoo, so T-Pain responds with this…

Everybody forgets man, but it’s cool. I’m super use to it.

Mohit, for one, was having none of T-Pain’s casual racism. He let one tweet loose…

Brown Twitter !! Sir is that what your response is .?? is this a apology or foolish ignorance .if you hadn’t been so stuck up in your world and realised that this song has crossed over a billion streaming’s .maybe you would understand #Shameless @Mithoon11 @itsBhushanKumar

A music producer weighed in, saying the term ‘brown Twitter’ “isn’t racist and never has been”…

Bruh. Calm down. People call stuff Black Twitter and Brown Twitter to refer to people of different races in context of social media. It’s not racist and it has never been. Also how is he supposed to know about the song when he is half a planet away? He was willing to admit to it.

T-Pain went on to say this, with no apology forthcoming…

Uuuummm ok so I’m gonna guess that we in America are the only ones that call ourselves black twitter/ white twitter/ brown twitter yo! The iPhone literally auto corrected me while typing all that 😂 but I’ll take the “racists” thing over “king of rnb” any day for sure. RIGHT?!?!?

But T-Pain hasn’t called it quits, slyly releasing the track on Spotify and other audio streaming platforms…