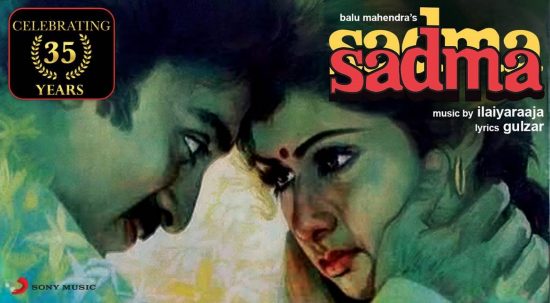 We celebrate Sadma’s music by Ilaiyaraaja and lyrics by Gulzar

Sadma and its timeless music completes 35 years today and while it was a splendid tragicomic tale of a do-gooder doing right by a girl suffering from amnesia, starring Kamal Haasan and Sridevi, we believe it would have had half the impact it had, had it not been for Ilaiyaraaja’s haunting soundtrack and Gulzar’s haunting lyrics.

Back in 1983, it was a brave new world in Bollywood. If there were mainstream movies hitting the marquee and becoming the highest grossers that year (think Himmatwala, Betaab or Hero), it was a year also known for ground-breaking films like Jaane Bhi Do Yaaron, Masoom, Woh 7 Din and Sadma.

Right from the endlessly covered Aye Zindagi Gale Lagaa Le (last heard in Shah Rukh Khan-Alia Bhatt starrer Dear Zindagi) to the devastatingly beautiful lullaby Surmayee Akhiyon Mein (Sad Version), Gulzar’s poetry has not aged a bit. It still feels as fresh as it would have been in 1983.

And as Ilaiyaraaja prepares to break new boundaries again — he’s composing for his first Marathi film, Flicker — here’s looking back at his forever young soundtrack for Sadma…

Or you stream the album on Saavn here:
https://www.saavn.com/s/album/hindi/Sadma-2016/NQJhoeo-aHY_