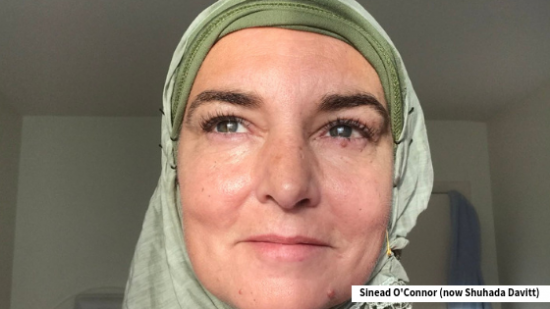 She now goes by the name Shuhada’

Sinead O’Connor announced her renouncing of Catholicism last week (October 19) via Twitter. She tweeted about her conversion to Islam and her change of name.

The singer will now be known as Shuhada’. A cursory search of the meaning of the word yields this: It’s the plural of the Arabic word, ‘shaheed’, which means ‘martyrs’.

The star changed her name on her Twitter page to Shuhada’ Davitt. Her handle, @MagdaDavitt77, contains the moniker she previously legally adopted last year.

The first tweet by the ‘Nothing Compares 2 U’ singer about Islam, comes on Oct 12, where she speaks about women being allowed to sing the azaan…

Holy shit. I’ve heard maybe a hundred Azan in my life since I was 18. Only today I wondered is a woman ‘allowed’ sing it. Turns out that’s like asking can a bear shit in the woods or should Bob Dylan be president immediately (because it’s an emergency) https://t.co/15CXBNmRMs

This is to announce that I am proud to have become a Muslim. This is the natural conclusion of any intelligent theologian’s journey. All scripture study leads to Islam. Which makes all other scriptures redundant. I will be given (another) new name. It will be Shuhada’

She then posted her first attempt at singing the ‘azan’

Here is my 1st attempt at singing the Azan. I got some pronouncition wrong because emotions took me from my page… but there’ll be hundreds of others onstage to come … https://t.co/vDFyheqOOc

Acknowledging that she had made some “mistakes”, she tweeted:

Sorry re all the mistakes in my Azan…. 1st attempt. When I’ve practiced it 30 times i’m Gonna make the world stop turning

She then went on to post another female singer (Mai Kamal) singing the azan.

She spoke about wearing the hijab for the first time.

My best friend, Elaine just gave me my 1st Hijab and she got chills all over her body when I put it on. Not gonna post a photo because is intensely personal. And I’m an ugly old hag. But I’m a very, very, very happy old hag.

Said she wouldn’t post a picture (because it was “too personal”), but did it anyway.

And did it again and captioned it “Happy”

I should have said the Q’raan CONFIRMS previous scriptures Except where it points out illegal
alterations in those scriptures. Made by those who did not submit themselves as they ought have, to God. Who by the way never gets any royalties when people buy the Bible

And then tried her best at pronouncing the Arabic word “Alhamdulillah” which beans ‘Praise be to God’ with some help from Irish Imam Shaykh Dr Umar al-Qadri, even putting up a video of the effort.

I keep getting the Arabic words wrong!! I’m so sorry!! I’ll get them right eventually. In sha Allah https://t.co/DVzkDcjuJU

Thank you so much to all my Muslim brothers and sisters who have been so kind as to welcome me to Ummah today on this page. You can’t begin to imagine how much your tenderness means to me ❤️❤️❤️❤️❤️❤️❤️

This isn’t, however, the first time the singer has publicly spoken about religion and the state of her faith. In 1992, she sparked controversy after ripping up a photograph of the Pope live on US television.

By her own account, she seems to have “found peace”.