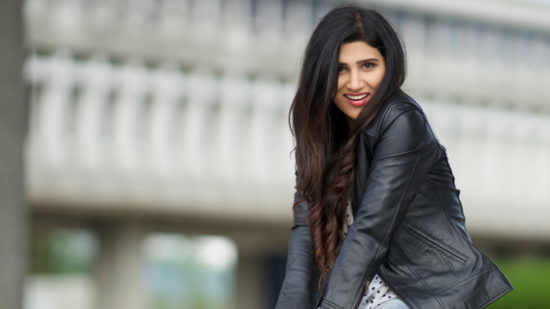 Have you heard the Reprise version of Soorma’s Ishq Di Baajiyaan, sung by and re-arranged by Shashaa Tirupati? Chances are if you have, you’ll come away touched by the emotion in her voice. A slower, more soulful rendition than Diljit Dosanjh’s original composed by Shankar Ehsaan Loy and penned by Gulzar, it’ll make you wonder why the song didn’t have a female version in the first place. We spoke to the singer to ask her how she decided to do this track and how it came to be. Excerpts from our conversation:

So this reprise version of Ishq Di Baajiyaan… how did it come to be?
I heard the original song. It was one of the very few songs that I heard at first go that kinda hit me. It’s been incredibly composed and sung by Shankar Ehsaan Loy and Diljit Dosanjh respectively. And I decided to do a female version of the song. I have arranged the new version as well as sung it. It’s got Sid Paul on guitar [whos is also part of other YouTube videos I have done on my channel] and Crehyl Pereira on keys (Crehl plays with Clinton Cerejo, Nikhil D Souza and Sona Mohapatra et al).

What was the most difficult part of putting this single together?
I think the most intriguing and beautiful part of the song was maintaining the passion in it. And there is so much passion in terms of the arrangement, in terms of the composition, in terms of the singing itself. For me, that was a task, to not overdo it yet not underplay it, and maintain a middle ground in terms of how I wanted the song to progress.

How is it different from the original?
if you listen carefully, there’s a major graph in it. If you listen to the original song, it starts off with very minimal strings and it goes into a little more percussion, then it suddenly goes into a full groove. There are great dynamics in the original song. I wanted to theme it down a little because I wanted it to suit my vocal timbre, so I kept it very acoustic in certain parts. In other parts, I added a bit of clean guitars, in other parts I added a little bit of clean guitars, electric guitar and a couple of very,very minor components that have been produced. Everything else is pretty much live. I was holding myself from tears while I was doing the recording. It was such a beautiful song, I was literally getting goosebumps singing the song. It’s just that kind of a song.

This is something that came from your end first or you were approached to do it?
I’ve been rather selective with the songs I choose. So when I heard Ishq di Baajiyaan, it really hit me and I decided to do it. We shot it, I heard the master and suddenly just, I was like, it would be wonderful if Sony would be able to hear it. For me, I wanted the entire team behind the song to hear my version of the song because I thought that it would be wonderful for them to hear that there could also be a female perspective. They liked it and agreed to put it up as a reprise version.

And now that it’s done, what are your thoughts?
I don’t know how well this female voice gels with the Punjabi lyrics. I do understand a little bit of Punjabi, not all of it. So I don’t know if that would be very… but, in terms of musicality, I feel this would have equally been a beautiful female song as well. I just wish they had two versions of this song, you know.

Have you sung in Punjabi before?
Yeah, absolutely. My mum speaks Punjabi very fluently. And also, I am from Vancouver, which is pretty much Punjab, so I can actually read and write in Gurmukhi script. Just that my spoken Punjabi spoken is a little slow.

If you had to mention three highlights in the Reprise version.
1. It is my debut arrangements that’s coming out so… I have arranged a lot, I mean, I was fully into composition and production, five-six years ago, but this is the first one that’s full-fledgedly releasing through a label. Definitely the arrangement.
2. The soul, which has been out into the song.
3. My co-musicians who are on the track. They are wonderful musicians. They feature in the video as well.