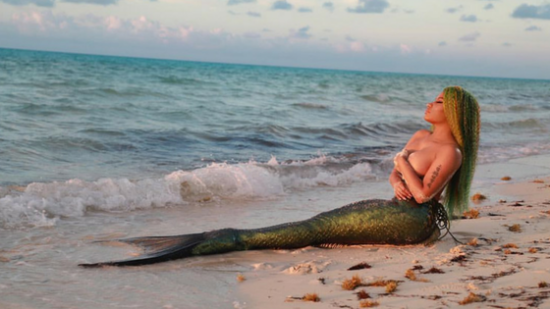 Her real name is Onika Tanya Maraj, but she popularly goes by her stage name, Nicki Minaj, which if you haven’t guessed it yet, used to be one of her alter-egos. Her latest one, Romania The Mermaid, was seen in her video for ‘Bed’ with Ariana Grande.

Unlike most singers or rappers, though, Nicki’s alters are defined by her persona’s characteristics, rather than her alters’, but she calls it that anyway. At last count, she had 18 alter-egos, Romania included.

Let’s do a round-up of some of the best-known ones: Cookie, Onika, Barbie, Female Weezy, Roman Zolanski and Chun Li.

In the video below, Nicki Minaj is seen sporting long green hair song with a mermaid look. When asked by a fan if it was a new alter, she said, “That’s not me. That’s a real mermaid. We captured her in rare form. Before we knew it, she was gone. She didn’t like the cameras & drones.” When pressed for an answer, she confirmed the news. Another fan asked, “What’s her name?” The answer came, “Romania”.