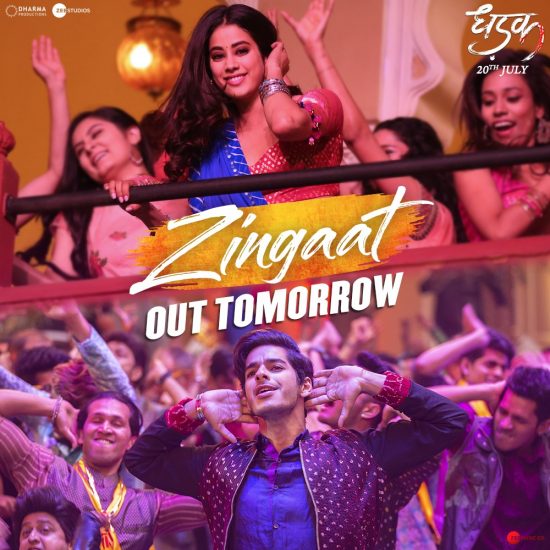 The official Hindi remake of the celebrated Marathi blockbuster will feature four songs in all, two will be original compositions

The trailer launch of Dhadak was witness to some important announcements, music-wise. The Ishaan Khatter-Janhvi Kapoor starrer will have music by Ajay Atul set to lyrics by Amitabh Bhattacharya. After the release of the title song, the Hindi version of  Zingaat becomes the second single to be launched.

Zingaat and Yad Lagla are “adaptations” of hits from the original Marathi film Sairat (again, music by Ajay-Atul), two other songs will be original creations for the Hindi remake of the Nagraj Popatrao Manjule original.We first saw a glimpse of Zingaat playing during the trailer launch.

Speaking about Dharma Productions’ continued association with the composer-duo, producer Karan Johar said, “We have had the pleasure of working with them on Agneepath (2012) and Brothers (2015). We know that the footprint that they have left behind in the world of music has been huge; not only humongously popular and successful but their sense of melody… and I have to say this personally, always takes me back to the era of Laxmikant-Pyarelal.”

Elaborating further, he said, “The ability to put out that kind of sounds, that kind of music, that orchestral brilliance is theirs and theirs alone. In this film, we are very happy that two of our songs are original and two of our songs are adaptations. Well, here we can’t consider these as adaptations because the melody you can never adapt, you can bow your head down and respect them. The two songs — Zingaat and Yad Lagla — have both been from Sairat. This time, we’ve collaborated with the boy genius Amitabh Bhattacharya, who has collaborated with Dharma before on many of our films.”

Incidentally, it needs to be said that this won’t be the first time Ajay-Atul have adapted one of their Marathi hits for a Dharma Productions remake. They did so for Agneepath’s Chikni Chameli, which owes its origins to Kombadi Palali from the Marathi film, Jatra.