REVIEW: ‘Mazhai Kuruvi’ is a perfect blend of love and heartbreak put together by AR Rahman and Vairamuthu

Mazhai Kuruvi is the latest ‘slow poison’ sung by Isai Puyal AR Rahman — a perfect blend of love and heartbreak knit together in the form of a story, linking nature and a sparrow (the ‘kuruvi’). The lyric video for the recently released single off the soundtrack of the Mani Ratnam film Chekka Chivantha Vaanam just dropped and we’re besotted. Here’s why…

The opening strains of the song wash over you, leaving a sense of tranquility and gentleness behind. And that calm stays with you.

Lyrically (lyrics by Vairamuthu, BTW), Mazhai Kuruvi tells of a boy sitting outside on a rainy day, thinking about love as he watches the sky bend to touch the earth. Searching his memories, he thinks back to the time the ‘chittu kuruvi’ [he lovingly calls the girl in his life, a ‘little sparrow’] sat beside him on a rock chirping out to him. The sparrow catches his attention, and questions, ‘Do you like me?’. His answer is obvious. He starts enjoying the sparrow’s company, its continuous chirping being music to his ears.

So yeah, the song is about a boy and girl meeting, finding an instant attraction to each other and eventually falling in love. And then, abruptly, he labels the relationship, ‘a dream that lasted a day’.

That sadness is depicted with the aid of rhetorical questions, emphasising how fleeting their togetherness was: ‘Are you the wind brushing past my face?’, ‘Are you the song that echoes in my dream?’

Their separation signals a change and the still serenity turns to blinding lightning, heavy rain and darkness, as if to underscore the pain he is going through.

Amidst the heavy downpour, the boy is only worried about the sparrow, wondering if it has found shelter to shield itself from the inclement weather; a clear depiction of his love for her. The sudden drop in ARR’s chirpy and cheerful voice, highlights the pain of loss through the lyrics: ‘Where is the sparrow? Does it know the direction in this forest?’

The final part of the song is all about his realization that he was drowning in depths of sadness but the sparrow was not even at the shallow end of the sea. The line, ‘the sparrow has forgotten about its nest, and is enjoying the music’ – talks about how the girl has moved on with ease while he held on to the pain.

It isn’t just Vairamuthu’s storytelling and intelligent word-play, but also, and without a doubt, ARR’s voice modulation that has worked its magic on the listeners.

Without implying that the boy hasn’t gotten over the girl, it’s apparent because the word-play is well-constructed. Mazhai Kuruvi is a story about a boy who loved deeply, but earned nothing other than pain in the end.

The song stands out because of its lyrics. With soft, soothing background music and the use of Tamil words with deep, heart-wrenching meaning, Isaipuyal A R Rahman‘s melody has the potential to drag listeners back in time, perhaps to the 90s, when songs had more meaning.

Totally repeat-worthy, we don’t have much to say about the visuals itself as there’s no context to the wedding scene (?) that plays out between Dayana Erappa and STR (aka Simbu) who play Chaaya and Ethi. 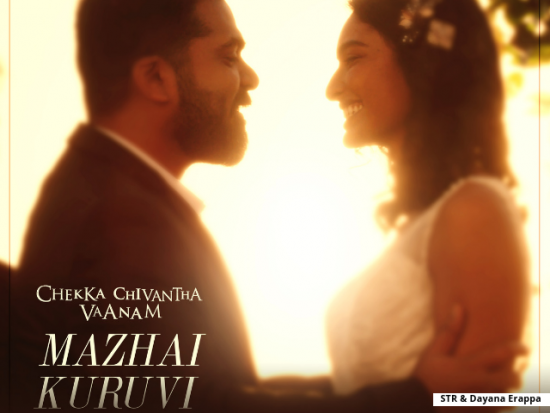 [Editor’s Note: Isai Puyal is one of the many titles given to ARR. It literally translates to ‘Music Cyclone’. Most AR Rahman songs are termed slow poison, in the sense that they “kill you slowly” or as we interpret it, ‘grows on you over time’]