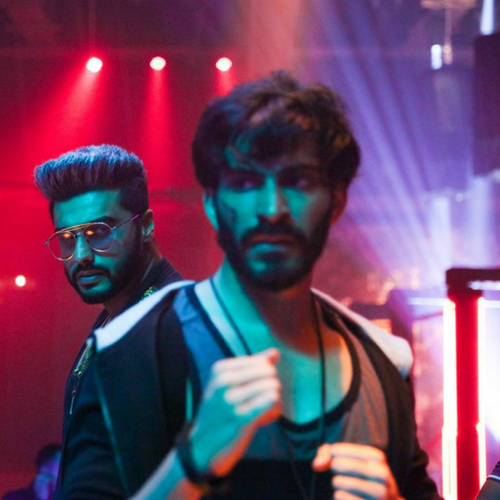 Doesn’t matter which one you’re talking about, it’s bad either way.

The Bhavesh Joshi Superhero song, #Chavanprash features Arjun Kapoorin an item number with the film’s lead actor (and his first cousin) Harshvardhan Kapoor in the background.

We get it that the video is meant to be gritty and is dimly lit for a reason. But even that doesn’t explain the lyrics (Amitabh Bhattacharya??) that go thus: ‘Chumme mein chyavanprash hai’ or ‘Chalti-phirti yoga ki class hai tu’.

What starts off as a scene from every sleazy song in every Bollywood film ever, somehow makes us think that Arjun Kapoor is setting us up for a comical disaster. He can be quirky and cute, but in this song, it is a dangerous combination because it burns our eyes as we look at the creepy thug he has turned into for this song. Hopefully, he didn’t practise this dance at his cousin sister’s wedding. Also, what’s with the Fight Club-meets-gym-meets-dance bar scenes?

The fact that this is something we don’t really associate Amit Trivedi or Divya Kumar with makes us wonder what the brief was here. We sincerely hoped that the song would be a remedy to the emotional trauma the music video caused but alas, two negatives don’t always make a positive.

Something in the vein of #MunniBadnaam or #Fevicol, this one feels out of place here. But it’s probably early pickings. We admit it all depends on how it fits into the film, but still we’ll hold our ground. They tried, they really did, but the mysterious thriller element only lasted so far. Sometimes, we need to know when to stop and by the looks of this, this had no pause button.

We are truly sorry you had to see this, our condolences are with you.