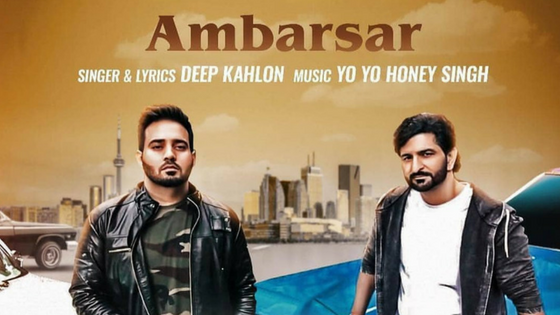 Jagga Jiunda E, a film by True Roots Productions, that happens to be Mika Singh’s banner, released its latest track ‘Ambarsar’ and it is creating quite a buzz in the industry. Reason being? The music has been given by none other than Yo Yo Honey Singh.

This song features Daljeet Kalsi, who is appearing on screens after 2017’s Sardar Saab, and the lyricist and singer of this track, Deep Kahlon. If you are hoping to catch a glimpse of Honey Singh in the song, you are going to be disappointed. There is no trace of him as he has simply given the music of this song, no rap.

While the music video looks a bit ‘off’, or maybe it’s because we expected Honey Singh entering with full swag and whatnot, the song is catchy with proper beats, good music by Honey Singh and powerful vocals delivered by Deep Kahlon. The acting looks too forced, almost robotic. Graffiti parks and expensive (not really) cars could have been used in more interesting ways, but perhaps the music video director, Harry Chahal, didn’t pay much attention to it. This song lacks Honey Singh, in all ways possible. We would suggest you to listen to this song without the video. That way, you won’t find his absence too absurd.

If Jagga Jiunda E, we would want the other songs to be just as lively as the title of the film suggests.