‘My goal is to be a Bollywood playback singer someday’ 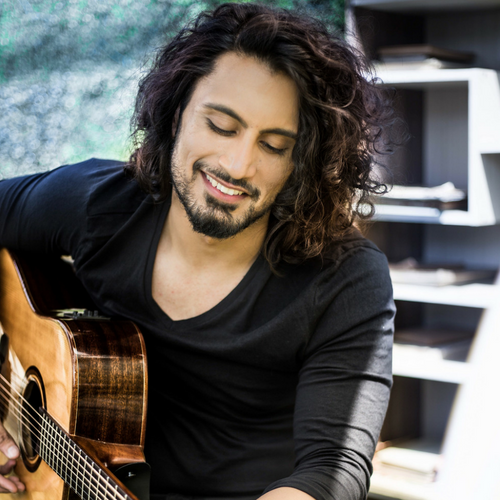 Singer Asa Singh on his dreams and ambitions and of course, his Punjabi medley mashup, which is quite something!

Everyone’s swaying to Akasa’s Thug Ranjha these days and it won’t be long before they start dancing to her brother Asa’s tunes. That is, if his latest Punjabi medley video is anything to go by.

A mashup of today’s biggest Punjabi numbers rendered in an acoustic fashion, it also sees Asa show off his acting skills. It sees him in a double role, opposite TV actress Aneri Vajani.

While he admits he still has some way to go before achieving his ultimate dream – making it in Bollywood as a playback singer – we believe that time will come sooner rather than later. Just check out his YouTube channel to know why.

We spoke to him recently about the recently released Punjabi Medley video, which we quite took a shine to. Here are excerpts from the conversation…

How did you decide on the songs you wanted?
It was something my friend (the guitarist in the video) and I came up with, while jamming. I wanted to do something that just had the guitar and vocals. No beats, no nothing… The reason we picked these songs — apart from the fact that they’re trending — is that they don’t have acoustic versions. Hence these tracks. Plus, they fit quite nicely in the mashup medley.

Who came up with the concept for the video?
Director Aditya Khude, who happens to be a friend. He heard the medley and after hearing it once, had this concept in mind for the video.

You have done several covers before. Which one is your favourite?
One would be Channa Mereya, it was the first song that crossed a million views. It gained me a lot of subscribers, fame and fans. Other than that, it would be the A.R. Rahman medley. It was loved by people and crossed a million views, too. Other than these, the video of the Punjabi Medley is also very special because this is something I did for the first time on my YouTube channel.

How did you get the actress Aneri Vajani on board?
Remember DAWgeek (aka Devansh Bhatia) from the video for Selfiestan (he’s the guy with big glasses playing an instrument? So, his sister and Aneri’s brother are really good friends. She posted my Channa Mereya video on her Instagram page. He told her Aneri was a big fan. Devansh’s sister forwarded that message back to me. Aneri and I got talking. I later put a shoutout on InstaStories, asking for someone to shoot the BTS of my Punjabi Medley video. She messaged me thinking I was also looking for the cast and everything. I didn’t have her before in mind, because obviously she’s a big TV star and I wasn’t sure if she would be up for doing something like this. When she told me she wanted to be part of the song, I made hear the entire medley. Things followed smoothly after that.

Bollywood or non-film singles. What are you considering more seriously?
Bollywood, for sure. My motive and goal is to be a #Bollywood playback singer. I’m training myself to achieve that.

Ever thought of composing your own songs?
I do compose. I mean, I used to compose earlier. Aise hain kuch gaane jo maine paanch minute mein likh diya tha. Uske alaava, I have composed a few songs. Plan hai toh to release a few of my original singles, but that has to be next level. Something bigger. A lot of planning needs to go into that.

Music runs in your family (his father Arvinder Singh Arv and sister Akasa are known singers). Will you ever do a single together?
We’ve thought of it and I keep getting asked this question, but for some reason it doesn’t happen. Ever since she’s signed up with Sony Music India, Akasa has a lot going for her. Now, before deciding on working something together, permission toh lena padega. We do plan on doing one quite often. Even our mom tells us that the two of us should come up with something. I’m free, Akasa should have time to spare to sit with me to make this happen. We have done shows together. Family-oriented performances on stage, you know. We get told this all the time. I have sung with my dad a couple of times. Some patriotic songs in 2012. Akasa, too, has sung with dad for a pahaadi film when we were still in school. We should do a song together soon, I think.