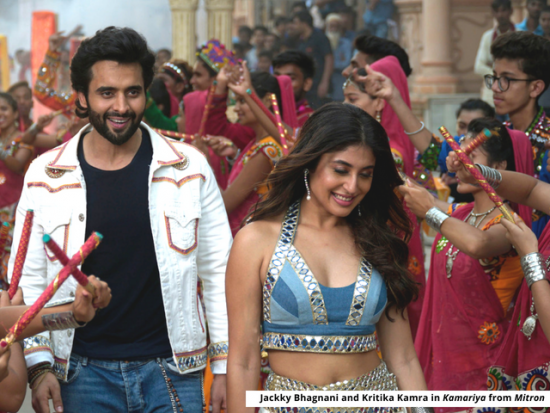 Watch a much-loved traditional Gujarati folk favourite take a spin around Amdavad’s by-lanes, courtesy Jackky Bhagnani and Kritika Kamra with musical support from pop sensation Darshan Raval, lyricist Kumaar and composers DJ Chetas and Lijo George. Say hello to Kamariya, the latest single from Mitron to get a music video after This Party Is Over Now, Sawarne Lage and Chalte Chalte.

With a distinctly festive feel, this undoubtedly feels like the track that will play over the end credits of the film. And it’s almost like a victory lap, visually.

Mudassar Khan’s choreography is mostly on-point, except when they try to incorporate flossing into the routine.

While most of this cut has been sharply edited, one feels it could do without the constant strobe effects.

The highlight, of course, is the catchy beats, infectious rap and the powerful vocals that really get you in the mood to look out for dandiya sticks and some festive finery and some mitron to halo with.

And the soundtrack review HERE