MUSIC VIDEO REVIEW: ‘Milegi Milegi’ is shake-worthy, but how often can you watch the video? 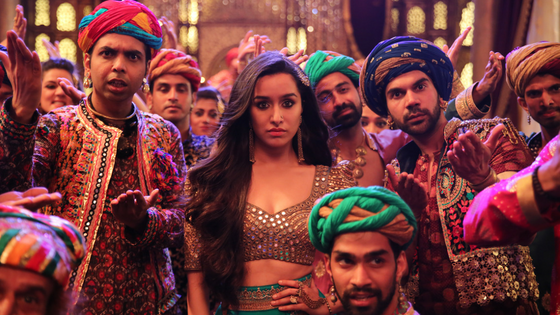 Shraddha Kapoor and Rajkummar Rao in Milegi Milegi from ‘Stree’

Stree’s first single MILEGI MILEGI makes you dance. No question about that. The video features lead pair Rajkummar Rao and Shraddha Kapoor finding the beats just too irresistible. ‘Have moves, will flaunt it’ seems to be the mantra.

Well, it might have something to do with the catchy tune by Sachin-Jigar, quirky lyrics by Vayu and vocals by Mika Singh. It’s the kind of bop that cuts across genres with just the right mix of madness, masti and music.

Video opens with a fantasy where Pankaj Tripathi rules and gets Shraddha to dance to his tunes… quite literally. Rajkummar and friends are the court musicians. When Mika starts singing, you see everybody shaking their… you-know-whats.

Beat pe booty-shake, in case you you were wondering. It’s a catchy tune that brings the party, but not in the outright just-gotta-do-it kinda way.

And you really can’t miss Rajkummar’s earnestness and Shraddha’s expressiveness throughout the video. It’s sort of the thing that’s appealing over and above the music itself.

But the glitch-like brightness issues throughout the video is headache-inducing. Hope they correct that.

STREE is a horror-comedy, inspired by a true phenomenon. The film is set in a town called Chanderi, where men have started disappearing mysteriously. The music will be released via T-Series.

The film is set to release in cinemas on August 31.