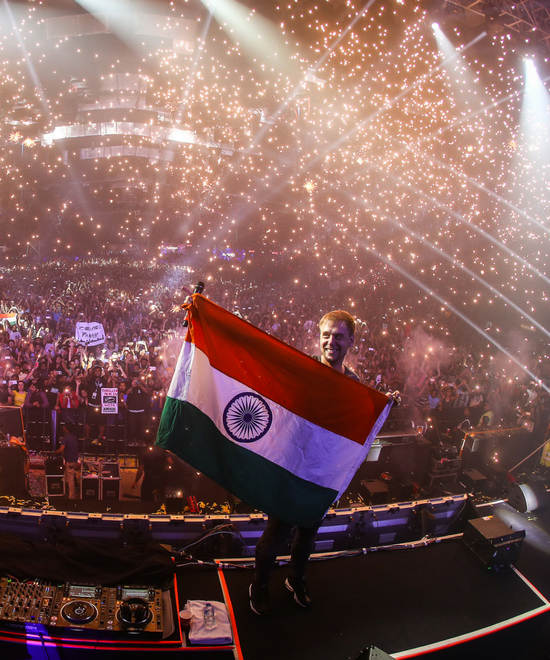 Bryan Durham for bandook
Earlier this year, with growing concerns about Enchanted Valley Carnival (EVC) having to find a new home (the former one being the Aamby Valley City airstrip) following a court decision, one wondered… is an indoor concert going to be as memorable?
Of the five editions of EVC now done with, I’ve been part of four as an attendee. Year after year, I’ve seen it grow in leaps and bounds into a truly multi-genre festival.
It’s been a spectacle worth waiting for each year — each edition as fresh in memory as the last. Each had its fair share of flaws, glitches and such, but at the same time, there were memories worth revisiting.
The fifth edition saw EVC in its new home – the Bombay Exhibition Centre (NESCO) in Hall 7-A. Now marketed as an indoor multi-genre music festival, it had a two-pronged line-up on a single-stage setup – doubling up as both the Electronic Family and the Cosmos Stage.
F&B counters were there throughout the venue, with bookmyshow working on a coupon system with cash/card payment options for alcohol. Food stalls, however, came under the purview of NESCO and after something of a delay, card transactions were not available as an option. Moreover, while the VIP area had several bar counters, there were only three food counters.
By comparison, the General Access area had several. Demarcated smoking zones also had mobile charging points and that was a thoughtful gesture, we thought.
Day 1’s opener was Indian DJ Snow Flakes (Mihir Patel), who was followed by GET MASSIVE, another Indian trance DJ. Both kept the crowds on their feet until Rodg and Ruben De Ronde took over. The two pulled off a winning set that had the crowds on their feet until Markus Schulz spun his way into the audience’s hearts, leading up to the big draw of the night, trance god Armin van Buuren himself!
Well, about Day 1, we can say this, none of the names (save for AVB and Markus) were as recognised by a general audience (as opposed to an EDM-loving one), but even so, they made their marks. A single stage meant there was no split attention. You were either at the main stage catching the acts or not at all.
It was AVB’s lit act, debuting a few tracks along with his best-known hits, including an orchestrated ‘technical glitch’ along with the well-practised ‘pose with the Indian flag’ moments that had the crowds go wild screaming themselves hoarse.
By the time Day 2 rolled around, the numbers of the ‘tribe’ had swelled. The openers were Unknown and @Absolute Famous. This was followed by Shirley Setia, who sang and shimmied on a dimly lit stage that made it difficult to make her out unless you were really close to the stage. It was HUGEL, making his first appearance at an Indian music festival who drew something of a mixed reaction – some absolutely loving it, others scratching their heads about the drops.
Next came Robin Schulz who played a plethora of commercial remixes, paving the way for the first of the big 3 acts of the evening – Nucleya.
From the get-go, Nucleya had the crowds eating out of his hands, grooving to every bass-boosted drop he threw their way. His AV setup was second to none, with every pop culture reference hitting the intended marks.
Then came the headliner of the day Arijit Singh, who took a while to set up. Once done, it went according to plan (we imagine) with literally everyone knowing the words to every song, swaying to shared memories. It was moments like these that made the festival worth all the hype and let us overlook a few glitches in the act. It wasn’t the singer, but technical failure in parts that made the experience a tad bit underwhelming. Of course, if you are an Arijit fan, this wouldn’t matter to you.
The big head-scratcher of the evening was DJ CHETAS, self-proclaimed best DJ in #Bollywood, paying tribute to his own fame with his fans (or should we say leftover Arijit/Bollywood music fans) staying back to sing along. He brought on stage Shirley Setia and a violinist. Announced a collaboration between him, Shirley and Atif Aslam even.
By the time the dust had settled, you wouldn’t remember the flaws, if you were a die-hard fan. As someone who’s been there, done that and seen a variety of experiences, we missed the drum circles, campsite conversations, moonlit nights, silent parties, crazy installations et al.
Enchanted? Not as much as we’d like to be! But hey, new beginnings and fresh starts mean one thing, you can only get better from here.