From a Bharat Ratna to India’s ‘anmol ratna’

The celebrated singer and the former PM shared a warm bond and she considered him a father figure. In 2014, Mangeshkar contributed to a music album of Vajpayee’s poems, titled ‘Antarnaad‘, handpicked by her and composer Mayuresh Pai.

In a recent tweet, she called him a “sadhupurush” (holy man), compared his stature to the Himalayas and his pureness of soul to the Ganges. She reveals that when she had recorded some of Atalji‘s poetry in the past for an album (Antarnaad), Than Gayi, Maut Se Than Gayi wasn’t part of it. She announced that she was now sharing it with the world and dedicated the song to his memoring with a link to the video.
Here’s the tweet:

The video opens with a dedication: “In understanding the lives of great men, I found that their victory was over themselves. The one person who reflected this was Atalji. His evolved and spiritual appreciation of the two most profound realities of life and death put him at peace with himself. He very gracefully embraced the harsh realities and rose above them. An unparalleled leader but to me, he will always be my ‘Dadda’. In his memory, I humbly bow down…
– Lata Mangeshkar

Heartfelt, it shows you the beautiful bond between the two personalities. 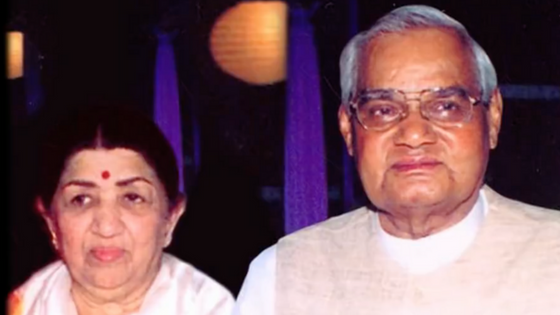