The opening lines of ‘Qaafirana’ speak of love as forbidden fruit and if you’re aware of what the story of Kedarnath is, you’ll get the context.

‘Qaafirana’, sung by Arijit Singh and Nikhita Gandhi, is the third single (with an accompanying music video) to release from the Kedarnath soundtrack. The film stars Sushant Singh Rajput opposite debutant Sara Ali Khan and features music by Amit Trivedi and lyrics by Amitabh Bhattacharya.

The video opens with Sara Ali Khan’s character taunting Sushant Singh Rajput’s character about his selfie-taking habit. He’s a human taxi, carting pilgrims on his back over long distances. She’s supposedly of better means, economically, from the looks of it.

Obviously (and quite predictably), this is the song where you see the star-crossed lovers fall for each other. She’s impressed by his quiet demeanour and he (presumably) by her dominance.

A rather touching sequence in the song is when she throws away tea he gets her and insists on having his, he doesn’t get the point immediately, but when the scene plays out again, he doesn’t need to be told twice.

There’s a palpable chemistry between the lead pair and that’s complemented by Amitabh’s sublime (and rather descriptive) verse that gets a voice in Arijit’s markedly different rendition.

By the time the chorus runs around, there’s an uplifting, hopeful twang that leads into Nikhita’s portion. The music melts away at one point, showcasing her unique voice to the hilt. Clearly the best moment of the song.

You don’t hear it as pronounced in the video, but the song starts out with some beautiful flute-playing by Paras Nath.

Kudos to Amit, Raja Rasaily, Vineeth Jayan and Meghdeep Bose on a rather well-programmed song that stays with you long after it’s done. 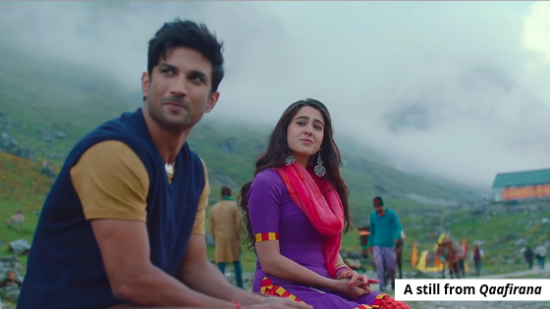