Jeff Timmons: ‘I would love to try Bollywood’ 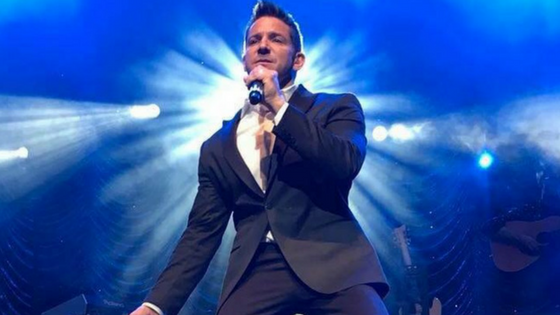 Jeff Timmons performing at Lord Of The Drinks in Mumbai

Jeff Timmons on working in India again at some point

Jeff Timmons was in India recently, his maiden outing in the country. The singer-songwriter-actor-producer was smitten by the country, posting images of his time in Mumbai while here.

He even found time to tell Badshah how much he’d like to work with him and added that he’d be honoured if AR Rahman’s collaboration came through.

Growing up, one was witness to a number of boy-bands at the top of their game, vying for chart supremacy. One of the names that stood out was, undoubtedly, the Grammy-nominated 98 Degrees. The band was active for several years since debuting in 1997, taking a hiatus in 2002. It would return for 2013’s 2.0. By that time, Nick Lachey had a reality show, while founding member Jeff Timmons had a thriving solo career.

Jeff has lived a busy life since with his career taking a different turn as he joined the Chippendales male stripper revue as a singer / performer and MC for a limited run in 2011. He would go on to start the Men of the Strip” revue as well, documenting the process for a docusoap for the E! Network.

We caught up with Jeff online and sent him our questions on his career, how he has lasted in the business for close to two decades, Bollywood aspirations and his take on current boybands. Here are his replies….

What’s the trick to longevity in the music business? Great talent or good looks?
I feel there are a couple of key things that lead to longevity in the music business. Hard work, of course, is key. You have to work harder than everyone else. Humility, faith, and self belief are all essential, as well as being willing to grow and evolve as an artist from both the music and performance standpoint. Lastly, that passion always has to be there.

That being said, what’s stopping you from trying your luck in Bollywood?
I would LOVE to try Bollywood. I think it would be so fun, and of course a great honor.

You’re a family man. When you’re touring and away from them, what’s the one thing that keeps you sane?
Without FaceTime and Skype, it used to be extremely hard to be away from the family. Fortunately for me, they come with me a lot of the time, which is a nice luxury. Usually, you’re so busy that you don’t have a whole lot of time to stop and think about it when they’re not with you, but nothing replaces time with the family, of course. You just have to keep it in the back of your mind that the work you are doing is providing for them.

Do you follow any special ritual/superstition before taking the stage?
The ritual before taking the stage is to do my best to calm my nerves. I still get ridiculously nervous before every show. It could be for 3 people or 3 million people, it’s the same every time. A couple of beers beforehand never hurt, lol. 😉

What is the one moment from your 20 years with 98 Degrees that will stay with you?
I have been blessed and fortunate to have many great moments over the years with 98 Degrees. I think having a #1 song with Mariah Carey is probably one of the greatest. Performing for Michael Jackson at his tribute show with Usher and Luther Vandross was also nice. The duet with Stevie Wonder for the Disney Mulan soundtrack… all of these were as if dreams became reality.

One current boyband that’s making all the right music moves?
I really was loving One Direction when they were out doing their thing together. I know they’ve all gone their separate ways, but I’d have to say they were the latest ones to dominate.

One thing today’s boybands will never have that 98 Degrees did?
Privacy! With social media, it’s impossible to keep a low profile. At least we could find a way to somewhat hideout when we needed a short breather. It’s sort of a double-edge sword, because of it was available to us we would’ve had fans in many more places. All in all, I’m grateful for the career that we have had, and the era in which we began. Blessed across the board. Thank you!