Holi Hai! But Where? 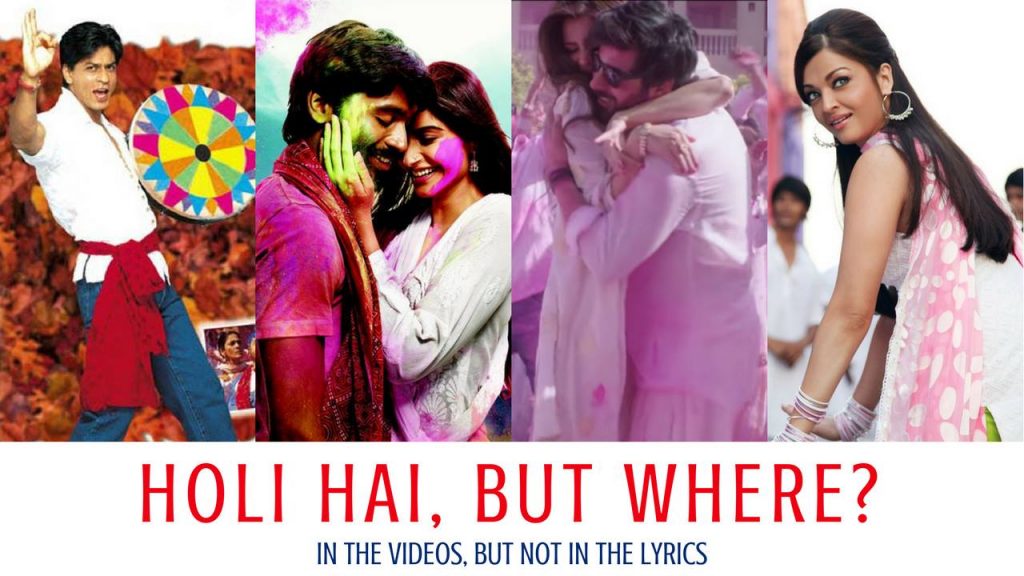 Holi Hai! But Where?
Songs set during the festival of colours that do not feature the festival’s name, colours or tools of the trade (so sorry, no Balam Pichkari)

Holi songs in Bollywood are usually spelt out as such. The idea being that the visuals tie in with the words, so that there is no room for doubt. And if not there is some reference to gulaal or any other colour or to a water gun of sorts. But there have been times, the only way these songs have any Holi connection is because of the visuals

#Cutiepie – Ae Dil Hai Mushkil
Set during pre-wedding celebrations, it features Ranbir Kapoor getting his drink on even as the girl he loves (Anushka Sharma) gets ready to marry the guy she loves (Fawad Afzal Khan). Can’t even say it’s a pre-wedding song until you actually watch the video.

#TumTak – Raanjhanaa
Raanjhanaa’s premise has a besotted lad (played by Dhanush) follow Sonam’s character everywhere. He takes forever to muster courage to tell her how he feels. But Holi or colours, nope nothing conveyed in lyrics, though this situation is.

#SoniSoni – Mohabbatein
Roothna-manaane waala song. Features several couples mingling together in a city square and playing with colours. But in the lyrics, no single mention of anything of the sort. Nada.

#ChhanKeMohalla – Action Replayyy
Beta goes in to past to prevent his parents from divorcing, in something straight out of Back To The Future. Aishwarya Rai Bachchan in flashback mode does a very 70s song about the difficulties of finding love, despite looking everywhere. But Holi or colours? Nope, no mention in the words.