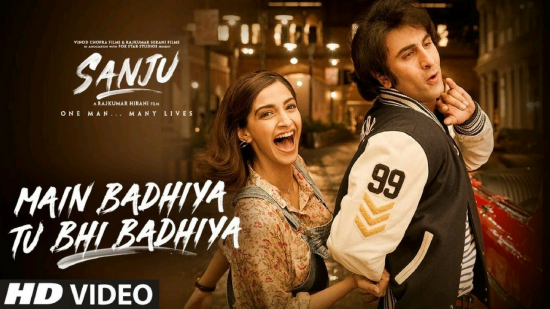 PREMISE: Sanjay Dutt (played by Ranbir Kapoor) wants to prove to his father, actor Sunil Dutt that he can lip sync with the best of them. And proceeds to do so to both male and female voices. His girlfriend (played by Sonam Kapoor) soon joins in the fun.

SOUND: Decidedly retro. Surprisingly even more dated than the era in which Sanjay Dutt started out. The vocal intonation on this one harks back to the late 40s-early 50s. The music follows a template that seems to resemble the sound in Bollywood in the 70s. Sanjay’s first film Rocky came out in 1981. Maybe there’s a reason for this?

MUSIC & LYRICS: Rohan-Rohan’s Bollywood debut is one for the books. It’s hard enough getting the flavour of a bygone era right. To do that surprisingly well, with some rather quirky lyrics by Puneet Sharma, without turning into a cringy caricature is something. Sunidhi and Sonu are splendidly on-point.

VISUALS: Ranbir and Sonam pair up for the first time since their debut film Saawariya. As Sanju, RK embodies the youthful spark you see in Rocky. There’s a vibrant happiness and unputoutable light in his eyes and in his manner. Also, don’t miss Jim Sarbh dancing in the background. By the way, what strikes us as particularly odd is that the instruments seen in the background are western wind and percussion instruments like trumpets, clarinets and drums. What you actually hear sounds more like shehnais, harmoniums and tablas. There must be a reason for all the contrasts. Right, Mr Hirani?

VERDICT: To enjoy the track in its entirety, stream and listen to it. If you’re content with just a taster, the music video should hold you just fine. It’s a joyful situational track talking about taking the relationship to the next stage and there being some light-hearted disagreement about that. That might just be where the song plays in the story. Fun, fuss-free and it sure brings back fond memories…