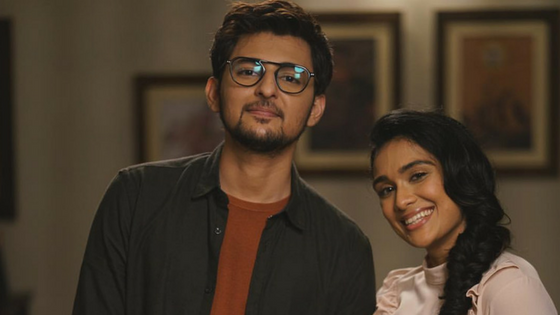 Everybody loves Darshan Raval (none more than the Darshaners), but that love doesn’t always spill over for his “co-actresses”. One romantic scene with their idol and they’re smitten by jealousy and over-protectiveness. But has that changed with his latest co-actress, Nityaami Shirke, who features in Baarish Lete Aana? Let’s see

We decided to ask a few hardcore Darshaners about who they thought his favourite co-actress from his videos, was. Here’s who they picked and why…

DIPTI DAS
Darshan Raval has taught us how to #spreadlove, so our main motive is spreading love, not hatred. I personally don’t hate any of his co-actresses, but if you ask me, it’s undoubtedly Shraddha Dangar (featured in Saari Ki Saari), Nityaami Shirke and Nikita Dhamija (Ishq Chadha Hai). No other reason but because they understood our love for Darshan our possessiveness for him, better than the others. If anyone tries to understand us even 1%, we promise we’ll love them more than anything else, too.💙

YOGYATA JAIN
Manmeet di (Manmeet Kaur from Ab Phirse Jab Baarish Hogi) and Nityaami . Because both of them are really sweet and cute 😍 and understand the feelings of fangirls really well and both of them are the only co actresses who didn’t get close to Darshan in the music video.

CHINI
Nityaami Shirke, because she maintained a distance and she’s beautiful, too And Malhaar Rathod is also very pretty as compared to the others.

RIYA JHAWAR (@gabbu_lovers_fc)
I love Shraddha di because her cuteness has my heart. She’s the first CO-ACTRESS I’m not jealous of. Even that kiss scene of Saari Ki Saari made me say “AWWWWW”. The role she played is perfection. gabbu_lovers_fc ( Riya Jhawar)

TANJILA TALUKDER
Nityaami is our favorite. TBH, she is the only actress I’ve personally liked so far. Mostly because she’s just so cheerful and happy all the time. That’s the best thing about her. Also the distance between them in the music video helped us like her more😂. Just kidding. But she’s just so sweet.

ROHAN (@dreamer_1825)
Mine will be Zaara Yasmin because Nayan Ne Bandh Raakhi Ne will be the most beautiful song of Darshan’s and yes, her Expressions her looks was completely Amazing in that song ❤❤ whenever I listen that song her performance makes that song even more beautiful so mine will be @zaarayesmin

SHATAKSHI (@darshanraval.fanfic)
It would me Malhaar Rathod for me as she’s a great actress! She did her work too well on Tera Zikr and that was one of the songs where the story could be felt from both the sides.

ANNESHA BASAK
I like his many co-actresses but Mishti Di (Nityaami Shirke) is my most Favourite. Because of her behaviour, the way she talks and her acting too💙 The way she said in live chat , “DARSHAN’S ALL YOURS GUYS WOH SIRF TUM SABKA HI HAI” that made me loved her more.

@bushradz
My favourite co-actress is surely Nityaami Shirke.To be really honest I’ve never “liked” any of his co-actresses. But this time I just couldn’t resist. Not because she didn’t have any intimate scenes with Darshan but her captivating smile and sweet behavior took my heart. Darshan couldn’t name her any better, Mishti. Shotti aikta mishti mei. Love her.💕

@nashhh.dr
I‘ve always been a super jealous fangirl when it comes to Darshan Raval and his co-actresses. I haven’t had a favourite. Until Baarish Lete Aana. I absolutely adore Nityami Shirke a.k.a Mishti [as Darshan says]. It’s just that – I admire her simply because with a beautiful face, Mishti owns a soul that attracts people towards her. At first glance, I understood that she’s full of life, and positivity, she’s outgoing and bubbly. Nityaami is a walking magnet with a personality that attracts, and I’m in love with that! She’s a beauty inside out.