Chaotic, crazy, cool – Welcome To The Party is our #justpushplay track of the day 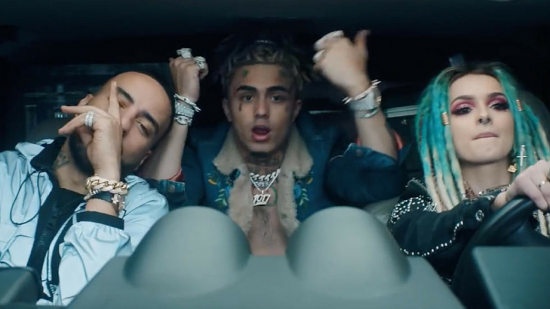 Ever since the release of Deadpool 2 and the first promo video for Welcome To The Party by Diplo, French Montana and Lil Pump ft Zhavia dropped, there’s been a buzz around the drop of the official music video for the track.

If you’ve seen the film, you know where the track plays during the movie and are immediately aware that this is a song that can play when you chill/raise hell with your squad.

It’s a banger, but not in the conventional sense. The audio isn’t your run-of-the-mill Diplo production and there are times you will feel overwhelmed by everything coming at you all at once.

The video, directed by Jason Koenig, captures the chaos and the craziness of the track, with editing enough to seem that the artists are part of the movie in some way. When it’s in that space, you don’t mind it too much.

But take the rest of the video and you wonder… where have we seen this before? And then you remember the No Limit (Remix) video, starring G-Eazyfeaturing ASAP Rocky, Cardi B, French Montana, Juicy J & Belly. That video was directed by Daniel Cz.

Compare both videos in the way the shots are colored and crafted and how it plays out. Welcome… comes off as a whole less risque, but feels quite derivative in concept.

But the reason why we suggest you #justpushplay for this video is the fact that it gleefully (and seamlessly) ties in to the film’s scenes.