Bryan Adams in India this October!

This will be his fifth visit to the country 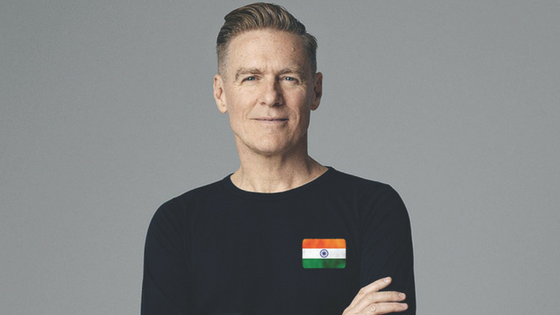 Bryan Adams ends a seven-year itch and is all set to visit India come October 2018 for the five-city Ultimate Tour in support of his 21-track compilation album Ultimate, which released in November last year. The Indian leg of the tour is produced by ENIL. The tour kicks off with Ahmedabad and wraps up in India’s capital, New Delhi. Also included are festival stops in Mumbai, Hyderabad and Bengaluru.

The Ultimate Tour will see the multi-million selling recording artist perform material from the 14th studio album, which features a mix of new tracks and enormous hits from an incredible back-catalogue.

The aim of Ultimate was to condense Bryan Adams’ extensive back catalogue – 13 studio albums, 5 live albums, 5 compilation albums and over 75 singles – into a 21-track offering guaranteed to capture the true essence of the celebrated hitmaker’s much celebrated career.

Bryan Adams says, “Namaste. India is one of my favorite places in the whole world. The love and generosity that I have experienced here is immense and I am eternally grateful to ENIL for the opportunity to perform again in this beautiful country.”

Mahesh Shetty, COO ENIL states, “ For a lot of Indians, Bryan Adams was the introduction to the sheer simplicity and awesomeness of rock’n’roll. He enjoys a devout following in India with most of his albums becoming super hits in the sub-continent. We are extremely excited to bring forth this tour to India and anticipate a total sell-out.”