Brendon Urie comes out as pansexual. Here are 6 other gender-blind singers 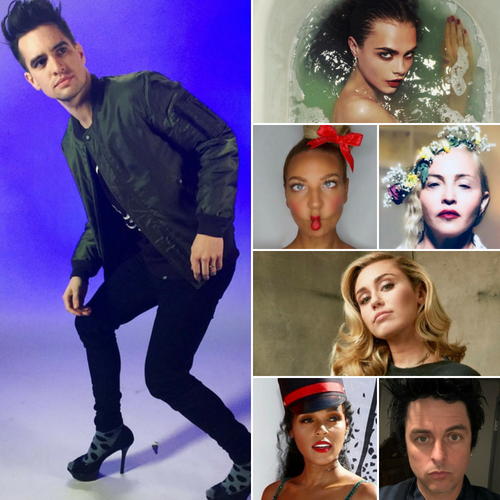 The Panic! At The Disco singer says he is married to a woman who he loves but isn’t opposed to a man. And he is not the only singer to have come out of the closet.

The Panic! At The Disco singer opened up about his sexuality to Paper magazine, stating: “I’m married to a woman and I’m very much in love with her but I’m not opposed to a man because to me, I like a person. Yeah, I guess you could qualify me as pansexual because I really don’t care. If a person is great, then a person is great. just like good people, if your heart’s in the right place. I’m definitely attracted to men. It’s just people that I am attracted to. I guess this is me coming out as pansexual.”

However, while we take note of this, we can’t forget singers who also came out as pansexual.

Janelle Monae
“Being a queer black woman in America — someone who has been in relationships with both men and women — I consider myself to be a free-ass motherf****r,’ she said to The Rolling Stone magazine. “Later I read about pansexuality and was like, Oh, these are things that I identify with too. I’m open to learning more about who I am.”

Miley Cyrus
In Variety’s Power of Women L.A. Issue, Miley explained, “My whole life, I didn’t understand my own gender and my own sexuality. I always hated the word ‘bisexual,’ because that’s even putting me in a box. I don’t ever think about someone being a boy or someone being a girl. Also, my nipple pasties and s–t never felt sexualized to me. My eyes started opening in the fifth or sixth grade. My first relationship in my life was with a chick. I grew up in a very religious Southern family. I went to the LGBTQ center here in L.A., and I started hearing these stories. I saw one human in particular who didn’t identify as male or female. Looking at them, they were both: beautiful and sexy and tough but vulnerable and feminine but masculine. And I related to that person more than I related to anyone in my life. Once I understood my gender more, which was unassigned, then I understood my sexuality more. I was like, ‘Oh — that’s why I don’t feel straight and I don’t feel gay. It’s because I’m not.'”

Sia
Via FasterLouder, Sia said, “Before I was actually successful I’d always said I’ve always dated boys and girls and anything in between. I don’t care what gender you are, it’s about people”

Billie Joe Armstrong
Billie told Out magazine, “I think I’ve always been bisexual. I mean, it’s something that I’ve always been interested in. I think people are born bisexual, and it’s just that our parents and society kind of veer us off into this feeling of ‘Oh, I can’t.’ They say it’s taboo. It’s ingrained in our heads that it’s bad when it’s not bad at all. It’s a very beautiful thing.”

Madonna
Madonna has always had the full support of the LGBTQ community as a “gay icon.” From her kiss with Britney Spears to dating Jenny Shimizu and Ingrid Cazares, Madonna has always been open about her gender-blind tolerance. Madonna has shown people how it feels to be a pansexual.

Cara Delevingne
“Every day, I change. Every day, I’m discovering new things about myself.” Cara also explained to Vogue, “It took me a long time to accept the idea [of being attracted to women]—until I first fell in love with a girl at 20 and recognized that I had to accept it… We’re all liquid. We change, we grow. Once I spoke about my sexual fluidity, people were like, ‘So you’re gay.’ And I’m like, ‘No, I’m not gay. A lot of the friends I have who are straight have such an old way of thinking. It’s ‘So you’re just gay, right?’ [They] don’t understand it. [If] I’m like, ‘Oh, I really like this guy,’ [they’re like], ‘But you’re gay.’ I’m like, ‘No, you’re so annoying!’…. Someone is in a relationship with a girl one minute, or a boy is in a relationship with a boy, I don’t want them to be pigeonholed.”