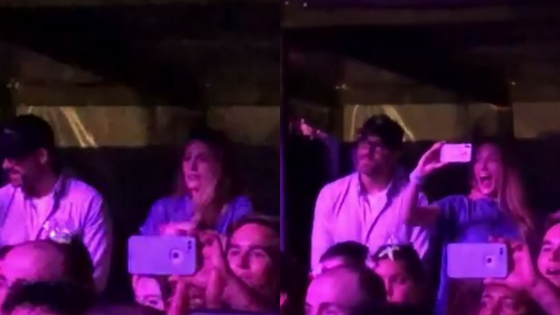 Blake Lively and Ryan Reynolds react to hearing ‘Gorgeous’ at a Taylor Swift Concert. And it is absolutely worth it

We know just how huge of a ‘Reputation’ Taylor Swift has. But the singer’s new album gives our favourite couple, Blake Lively and Ryan Reynolds an entirely valid reason to celebrate. Reason being? It features their daughter James Lively on the track ‘Gorgeous’.

The couple and their daughters, James and Inez, were reportedly at a beach with Taylor, where she played them an early version of the song. James said ‘Gorgeous’ repeatedly and Swift asked if she could use the sound bite in the song. And there it is, the moment the song starts, you can hear James’ adorable voice saying ‘Gorgeous’.

Taylor was with Blake and Ryan at the beach and was playing gorgeous for them on her guitar, and then their daughter, James, kept saying “gorgeous” over and over

.. so Taylor was like, “could i use that?” and the intro was born

The couple attended a Taylor Swift concert at the Gillette Stadium in Massachusetts. Not only did they want to support their friend but they also hear wanted to hear their three-year-old’s voice featured on the song live. And no, their reaction did not disappoint.

In a video taken by Sofia Jain, Blake is seen recording the concert on her phone. When Taylor told the crowd the next song would be Gorgeous, Blake and Ryan jumped and screamed in excitement, just like proud parents would.

BLAKE AND RYAN ARE SO CUTE REACTING TO GORGEOUS pic.twitter.com/iEWlxSL4Xd