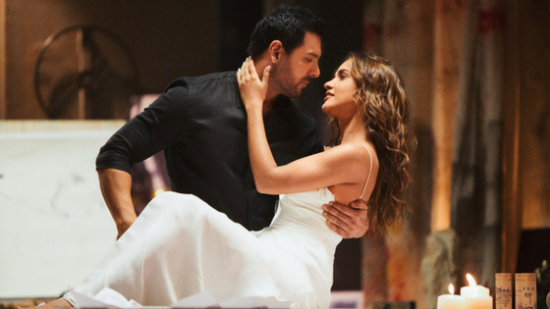 The second single of Satyameva Jayate, ‘Paniyon Sa’ is out today. A romantic track penned by Kumaar and scored by Rochak Kohli, it is picturised on John Abraham and Aisha Sharma and sung by Atif Aslam and Tulsi Kumar.

Satyameva Jayate is a film about a serial killer battling corruption — especially within the police forces — on the sly. John plays the vigilante in question and a reference is made to this by Aisha, in the video accompanying the release of this single.

But this isn’t an action track or a song about “the system” or a fight against it. It’s a love song that checks out the budding love between John and Aisha’s characters. She’s a bit wary at the start but one wall-paint session later, she’s all over him.

They fall hard for each other. And forget where they are. Aisha is with a class of students and they almost kiss (before being discovered). It’s a cute scene and conveys what it needs to. It’s just that the sequence could have been done without and feels forced

This is Kumaar and Rochak’s second collaboration in quick succession. Not too long ago, Rochak and Kumaar released a single Chan Kitthan with Ayushmann Khurrana.

It’s a simple few opening lines before Tulsi sings her portion. But what stands out, is the breezy chorus that plays over steadling playing guitar.

Suffice it to say, we’ve forgotten he ever sang for Race 3’s Selfish. Well, almost….