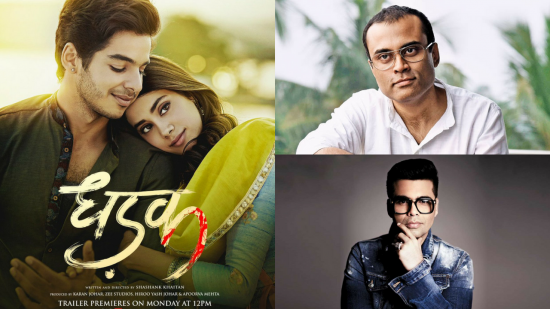 Amitabh Bhattacharya will be writing the lyrics for Dhadak, the Hindi remake of Marathi blockbuster Sairat सैराट. Ajay Atul have been retained as the music composers for the Ishan Khattar-Jahnvi Kapoor starrer.

When asked at the trailer launch of the Dharma Productions production by producer Karan Johar what he felt about stepping into some “amazing shoes” to put his spin on tracks, especially Zingaat, which was already a “national phenomenon”, Amitabh admitted it was a challenge.

He said, “It was quite daunting because Zingaat is already a very big song. Log usko zabaani jaante hain. To write it in Hindi aur interest banaye rakhna, was very tough. So was Yad Lagla. People love it equally well. I had to work on it, just as hard and Ajay-Atul and Shashank know this. But I’m really happy that it has turned out to be so beautiful and the title song is also my favourite song.”

Karan then mused that the greatest contribution Amitabh made to Zingaat “was to not change the word Zingaat for Dhadak”. Added Johar, “Therein lies the brilliance, Amitabh. You realise that’s a phonetic that you can never ever replicate or change or create an impact by (changing it).”