Abhishek Bachchan turned host as he talked to director Anurag Kashyap about his music always fitting his stories at the Manmarziyaan Album Tour at the JRM Grounds in NM College, Mumbai yesterday evening during the college’s annual Umang festival.

When asked how he picked the sounds of the film, Anurag simply said, “My process always begins with the creator. And here, that’s Amit Trivedi. I hear a script and I know it’s Amit Trivedi and I go to him with it. We’ve worked together for 10 years, so…”

He also let slip that AT was an inter-collegiate gymnast. “He can do backflips”, he shared. Abhishek took him up on the revelation, egging him on with “From a music concert, we’ll make it a talent show, you want to see Amit Trivedi do flips?” As the crowd erupted in cheers, Amit sheepishly said, “I can’t, I can’t. I’ll have to stretch. Without stretching, I’ll break my back.”

As if to distract from the revelation, Anurag continued with the explanation of how he selected the sounds he wanted in his films. “When Amit and I work together, he knows he doesn’t have to care about anything. Amit is not trying to please me, Amit is trying to create something that will please him. Amit only comes to me when he’s dying to share the sounds with me.”

Amit then took the stage to say he felt like he was in a cage when he’s working. “If I have to be honest, I feel like I’m in a cage. Like there’s this bandhan around me while I’m working on other films. The moment he (gestures at Anurag) comes in, he’s the only person who has the keys to that cage. He opens and I fly around and that’s because he sets me free. The amount of freedom and trust that I get from him is unbelievable.” Anurag piped in, “The first thing we chase out is safety. Safety goes out the window. Let’s not be safe.”

Abhishek then turned to the crowd to ask if they liked the music of Manmarziyaan and was met with resounding cheers. A number of answers came in reply to his question, which one was their favourite. He revealed that he had two.

Immediately, someone screamed ‘Kajraa Re‘ (from Bunty Aur Babli). To which, Abhishek quipped, “Not Kajraa Re. That’s another film. Gharwali (wife Aishwarya Rai Bachchan featured in that song) ko bulaana padega.”

He continued, “So, I have two (favourites). And I think they’re absolute geniuses. One is Hallaa and the other is Daryaa, which is just unbelievable.” 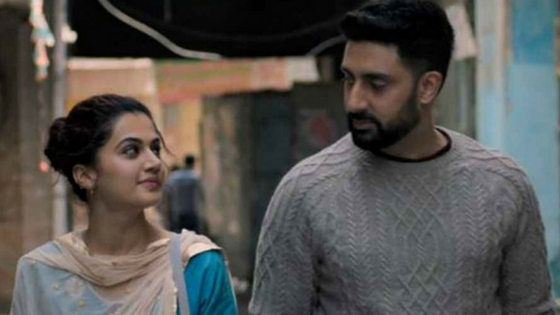 Taapsee Pannu and Abhishek Bachchan in a still from Manmarziyaan