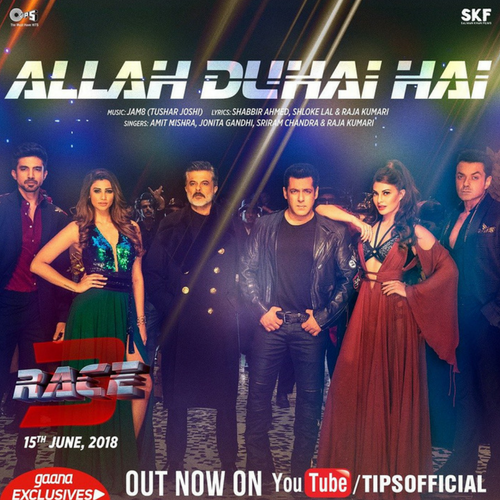 That one song that binds all the films in the franchise? Allah Duhai Hai is that song for the Race films. The version in the third instalment takes a long leap from the industrial grind of the first, the Halloween vibes of the second and instead, runs a ballet-meets-masquerade on the terrace.

Of course, this is all very high-end, in case you were wondering. Like any good society do, this one has the host (Salman Khan) staring down his familia and them eyeballing him right back. It’s a tense minute as Salman Khan says his bit and the camera pans to each character’s face to highlight who they are and how many expressions they can muster.

If you’re still around and just as curious, you’ll be treated to a rather dashing Anil S Kapoor shining brightest as Bhai and Co. wow you with their ‘intense’ acting.

Pritam’s #Jam8 (Tushar Joshi) on composing credits and lyrics by Shabbir Ahmed and Shloke Lal (with only the original hook by Sameer Anjaanretained) make this a rather tame outing.

Amit Mishra shares space with Sreerama Chandra and Jonita Gandhi while Raja Kumari comes in on the rap portions. Strangely enough, RK’s parts (which is the track’s strongest suit) has been left out of the music video released today.

The full song, in case you’re interested, is available, exclusively on Gaana.

That didn’t impress us much, sorry to say.