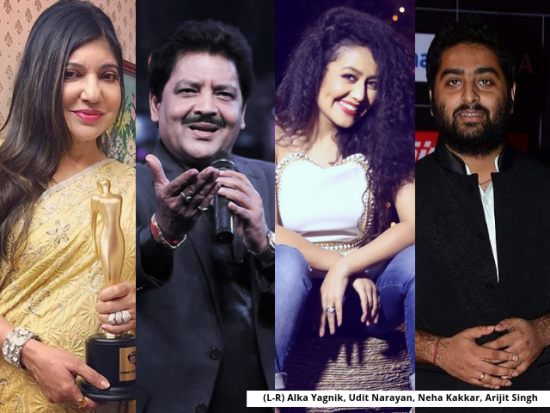 But that’s not something new. They’ve been on the list for almost half a year. What is worth knowing however is what got these four artists there, beating out competition from Drake, Ariana Grande and a full roster of Latin superstars.

Let’s start with Alka Yagnik. The Bollywood playback singer has a total view count of 646 million with India and Pakistan and Delhi and Pune contributing the most to that number. Her duet with Kumar Sanu, Teri Chunariya is the most watched. Last week, she was at #2 on the chart. As of this week, her viewership has dipped 4.4% (at 162 million views) and she has been on YT’s charts for 102 weeks.

Udit Narayan has the same audience but trails at 501 million views. Believe it or not, the remade Cheez Badi (from Machine) ft Neha Kakkar is the biggest contributor to his ranking on this list. Last week, he was at #6 on the chart. As of this week, his viewership dipped 7.5 % (119M views) and he has been on YT’s charts for 123 weeks (longer than Alka).

Neha Kakkar is in third place with a cumulative view count of 452 million, and the shortest run on this chart (99 weeks), making it to the top 10 in the shortest possible time, thanks to a massive hit in Dilbar (Satyameva Jayate), she also has two other big hits in the most-viewed Indian videos list. Her viewership is the same (Delhi and Pune contribute the most) with India and Bangladesh getting her on the list. She was on #7 last week As of this week, she had the biggest fall in views (of the other Indian artists in the top 10) with a 10.7 percent drop and 106M views this week.

Arijit Singh rounds up the top 10 as the longest stayer on this list at 132 weeks with the least dip in views (2.9 %) and 104M views this week. He stays steady at this position as of this week. With a total play of 386M, he has Pune and Delhi (in that order) to thank for this position. Tera Fitoor (Genius) is keeping him high on the list along with other most-viewed videos.

Kumar Sanu is the only other Indian singer in the Top 20. Lata Mangeshkar, Guru Randhawa, Badshah, Shreya Ghoshal, Dhvani Bhanushali, Anuradha Paudwal round up the Top 50.

Bringing India’s tally of artists in the top 100 in the world to 17! Which is saying a lot!