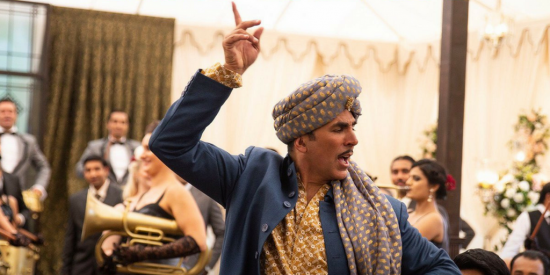 When you’re rising, there are many looking for you to fall. And fail. Akshay Kumar’s Tapan Das discovers that the hard way in Chad Gayi Hai, the second single released for Reema Kagti’s Gold.

Well, not the hard way. Not immediately, at least. He loves his drink. And is ‘helped on’ by a few shady elements who mix something in a bottle of alcohol and conveniently pass it his way.

He takes the bait and hits the bottle hard. And creates a scene in a prim-and-propah party with wife (played by Mouni Roy) and his hockey team watching on, first bemusedly and then, as the happy drunk in him goes into turbo mode, aghast.

So here’s the thing. Sachin-Jigar know how to throw a party. Vayu knows how to write a wacky party song. Vishal Dadlani knows how to belt out a hit.

Because, face it, this one WILL make you dance. And Akshay Kumar’s got an infectious energy that rubs off on you. Our only concern is this — this is a Bengali guy, that too in pre-Independence India, burning up the dancefloor with what one can only be described as a “Fun-jabi dance” number.

Yeah, we get national integration and all that, plus we love the song, but it is what it is…