Ajay Atul were ecstatic when they heard this news 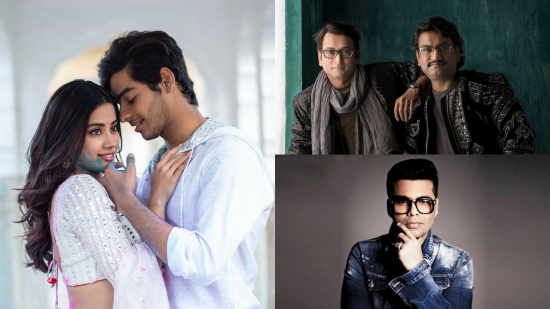 …when the composer duo heard that the Hindi remake of Sairat would be produced by melody ka johri, Karan Johar

The trailer launch of Dhadak starring Ishaan Khatter and Jhanvi Kapoorstarrer had the cast and crew of the film in attendance. The official Hindi remake of Sairat सैराट will have music by the Marathi hit’s original composer duo Ajay-Atul set to lyrics by Amitabh Bhattacharya. It will be Ajay-Atul’s third musical with Karan Johar’s Dharma Productions.

When asked by producer Karan Johar about how they felt about Dharma Productions remaking the Marathi film they’d originally given the music to, Atul said, “We were the happiest to hear that Dharma was on board Sairat’s Hindi remake. Our first musical blockbuster was Agneepath with Dharma. Then there was Sairat in Marathi and now, Sairat in Hindi with Dharma again. We are ecstatic about our continued association.”

Ajay added, “It’s true. We’ve had an old association with Zee Studios(original’s producer/ co-producer on the remake). We’ve worked predominantly in Marathi. Thanks to that work, we got to associate with Dharma. It was the melodies of Agneepath that became extremely popular. Chikni Chameli may have been a hot favourite but Abhi Mujh Mein Kahin also did very well. We managed to work on strong melodies in Sairat as well. Mujhe nahi lagta hai koi aur johri hai uska aapke siva.”

Visibly overwhelmed by the praise, Karan went on to reiterate that two songs from Sairat have made it to the Dhadak soundtrack. “Jo banta hai, full banta hai”, he said, adding, “But there are two original tracks in the film. And I have to say this, the title song of Dhadak, over and above these beautiful melodies, will be one of my favourites.”

Karan played a short audio cut of the Hindi Zingaat, announcing that it would release shortly after the release of Dhadak’s theatrical trailer. Ajay had the last word, when he said about the track, “It’s important that I say this. Most music directors we know call in to tell us, ‘What is Zingaat? Humko Zingaat ka hi brief milta hai and we’re told make a track like Zingaat. I’m so happy that Dhadak mein Zingaat hai, Zingaat jaisa nahi hai, but Zingaat actually hai!”