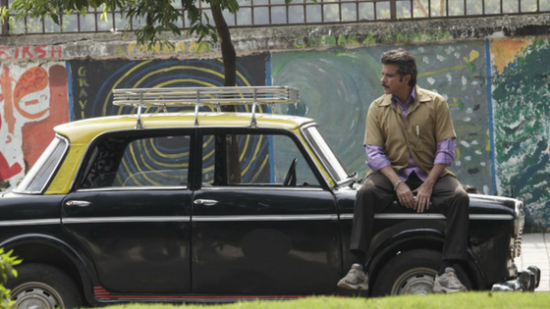 Fittingly so, as Anil’s character in Fanney Khan is a man with simple needs. A father struggling to realise his daughter’s (named after the Nightingale of India) dreams. When you see the video for ‘Achche Din’, it begins as a simple man’s story. A cab driver seemingly content with his lot, as he venerates his ‘gods’, Mohammad Rafi and Shammi Kapoor.

Of course, lyrically, the attempts at inclusiveness are not lost on you when Irshad Kamil writes ‘Khuda tumhein parnaam hai saadar (my gods, I pay obeisance to you)’ in the opening lines and follows it up with a rather hanging ‘par tumne di bas ek hi chaadar (we have but one bedsheets)’ asking ‘odhe kya bichayenge (Cover ourselves or spread it)? And then the lyrics get better, and more personal with the ‘roti’ and ‘langoti’ references.

You see Anil hanging out in several frames with the far younger Rajkummar Rao as they go about their business in a happy-go-lucky way. They buy lottery tickets, Anil’s character puts together the money he collects and is a guy who finds joy in small things.

So far, the only videos released have been centred around Aishwarya Rai Bachchan and Rajkummar Rao. This will be the first to predominantly have the man in the title role in focus.

Video-wise, it’s a delight. Director Atul Manjrekar’s vision for this visual comes through. Anil’s character is a dreamer and those dreams shine bright throughout this video.